The Courtesans In Southampton 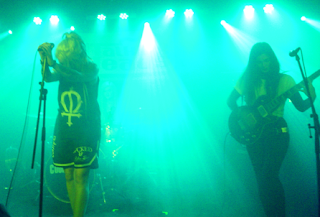 Last Friday the two of us went to Southampton to see The Courtesans, who were live at The Talking Heads there. It was a superlative experience, so I'm afraid you're now going to see several hundred words of me gushing.

Even travelling by Cross-Country Rail to get to Southampton was pleasant enough - certainly far easier than driving. The only slight problem was that there seemed to be no indication at Southampton Station which exit went where ... once we had left by the wrong exit we couldn't go back through the station to the right side of the tracks.

Southampton Novotel is easy walking distance from the station, even with the detour, so it wasn't a problem. The Novotel was a great find! Getting back from Southampton to Reading after a gig is a lot of hassle, so I had booked us a room overnight.

My previous experience of a hotel in Southampton had been decidedly meh, with complications even when things should have been simple. On this trip I had changed the number of people staying in the room (originally my wife was working that day, so it was just me, then her shifts changed so we could both go - nice, but a recipe for confusion) so I was expecting the worst. As it turned out they were brilliant: everything was sorted already, we just paid an extra tenner for breakfast at checkout. The room was comfortable, bar food was fairly simple but good quality, breakfast was excellent, and everyone was friendly and helpful. Oh, and the price was reasonable too.

So, after eating we popped back over the railway line to The Talking Heads, where the Courtesans were playing. They were having technical problems in the venue proper, so we couldn't go in at the official 'doors open' time. No problem: there was also a spacious front bar with a stack of real ales and some acoustic jigs playing (it was early on St Patrick's day night, so it was already busy).

When we did get in to the main concert room it was nice and spacious, with a bar down one side (also with real ales) and a corner with seating and a decent view of the stage on the other - handy for a knackered old codger to wait for the bands. Another feature of The Talking Heads was the friendliness of the clientele in general - although that may be just a feature of Southampton, or of the musical genre, as I noticed the same thing when I went to see Bad Pollyanna a while back.

The opening band were Lost or Stolen, a local band. When they started the room was completely dead; by about their third song you could feel the energy pumping out, warming things up. They were essentially blues-rock, but clearly wanting to push the boundaries of that genre, and themselves. From time to time they pushed further than they should have perhaps, and lost a bit of timing, but I can respect that: it's far better than a band who just play it safe and bland.

Main support was Ruby Blue and The Chain, occupying a sort of triple point between jazz, blues and funk, with consummate style and musicality. I am surprised to see on their website that they have only been around for about a year, they seemed to play so comfortable and eloquently together. I really enjoyed their gig and hope to see them again.

But the highlight of the evening, by a huge margin, was The Courtesans (just as an aside, searching for "Courtesans Southampton" returns some interesting results, including an ad claiming you can buy courtesans on Amazon!). Nothing particularly showy or flashy, just excellent, powerful music, presented with a depth of charisma and presence.

I already had their new EP, from PledgeMusic, so I thought I knew their most recent songs, but hearing them live was at a whole different level. The drumming was so powerful and spikey, bass and guitar so evocative, and the deeply passionate lyrics sung with such heartfelt strength that it was overwhelming. I'll stick a link to their Mesmerise video at the bottom of the post, so you can at least get a feel for their style ... just imagine that with the intensity racked up a few orders of magnitude.

A shout-out here for the sound at The Talking Heads - it was impeccable: loud enough but not too loud, beautifully balanced and wonderfully clear. Often live music means sacrificing sound quality for the live experience, but not here.

Do I have any negatives in the midst of all this dreadful positivity? Just one: by the end of the Courtesans' gig I was bouncing and jumping all over the place, absolutely into the music and the movement. Now I hurt pretty much all over. Would I do it all again? Silly question - I'd be there in a flash, aches or no aches!