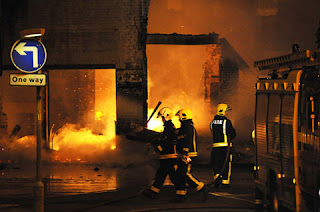 Back in the spring Mervyn King, governor of the Bank of England, told the UK parliament:


"The price of this financial crisis is being borne by people who absolutely did not cause it. Now is the period when the cost is being paid, I'm surprised that the degree of public anger has not been greater than it has."

As English cities face rioting which is more extensive than we have suffered for many years, politicians and rent-a-quotes queue up to condemn it as "mindless hooliganism" and "gratuitous violence". A more sensible response came from James Conolly, a community youth worker in Islington:


"They seem mostly to be looting opportunists. These kids are very annoyed, it's school holidays and they just want to have fun. Right now they are very, very hyper. They don't trust authority, or uniforms. The simple fact is the only people they respond to are community leaders."

As the Independent points out, many of the looters come from broken homes and damaged backgrounds. Aside from family members and the hooligans' peers, the people best able to calm this crisis are those in the third-sector who have spent years building trust and respect with young people. A consequence of the Government's austerity measures is that such people are far less able to do their work.

There seems to be a perception in political circles that those in power can do what they like, as long as they play the political system and keep the wealthy and influential onside. The poorer sections of our communities may not be influential in that sense, but eventually they get riled up and then it just takes a trigger at the wrong time. August is traditionally a peak time for civil violence, and another controversial killing by the Metropolitan Police, followed by more false 'off-the-record' briefings blaming the victim, makes for a powerful trigger. Mix in high youth unemployment, leaving lots of bored, frustrated young people on the streets, and you have a tinderbox.

As government policy favours the wealthy and the elderly, readers of the Daily Mail and the Daily Telegraph, and heavily penalises the young and the poor, pressure will continue to build. Last year it was middle-class youth protesting over broken promises on higher education, this year it is those with far less to lose. Politicians have already sown the wind, now we start to see how destructive a whirlwind they've unleashed.

Meanwhile it is shopkeepers and other small businesses who pay the price, not the politicians, bankers, and media moguls who caused the crises. Their judgement will presumably have to wait.
Posted by BlackPhi at 11:47 No comments: