China, Iran, Saudi Arabia, USA - some of the nations whose governments are most heavy handed in their political censorship of the internet. All have constitutions which, as I understand it, guarantee freedom of speech, yet all strongly attack those who embarrass the state.

China, Iran and Saudi Arabia, by and large, confine the bulk of their censorship to within their own state borders. The USA is trying, with some success so far, to censor the rest of the world as well. Death threats, threats of imprisonment, allegations of terrorist activity which would be laughable if they weren't so dangerous, government to government coercion - to which Australia has simply rolled over (at least initially), and Switzerland and Sweden appear to have been, at the very least, heavily influenced - and government to private industry coercion: Visa & Mastercard (who happily work with the Ku Klux Klan and its allies), PayPal, Amazon, and so on. It is remarkable how much effective control the US government actually has over the functioning of the internet.

So who has recently announced that they are to host Unesco's World Press Freedom day, 2011? The USA, of course. The writer of their press release appears to have a fine sense of irony:


"The theme for next year's commemoration will be 21st Century Media: New Frontiers, New Barriers. The United States places technology and innovation at the forefront of its diplomatic and development efforts. New media has empowered citizens around the world to report on their circumstances, express opinions on world events, and exchange information in environments sometimes hostile to such exercises of individuals' right to freedom of expression. At the same time, we are concerned about the determination of some governments to censor and silence individuals, and to restrict the free flow of information. We mark events such as World Press Freedom Day in the context of our enduring commitment to support and expand press freedom and the free flow of information in this digital age."

As this Guardian news blog put it: "Shameless. You really could not make it up."

To end on a lighter note, the best joke of the week so far - thanks again to the Guardian Newspaper's blog - comes from Ben Yarrow's Twitter account (with a hat tip to @janinegibson):


Freedom of Speech - priceless. For everything else, there's MasterCard.

I Wish I'd Written That 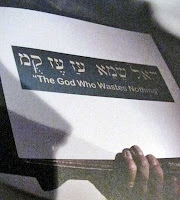 'The God Who Wastes Nothing', on Be Free Mama
Or, at least, I wish I could write that well about things that matter.

Rob Bell is an American speaker/preacher who is best known for his Noomas - short (10 to 14 minutes), punchy, real-life DVDs, which aim to "explore our world from a perspective of Jesus". More recently he has also done a series of speaking tours where he goes to the opposite extreme of speaking for around 2 hours; with the talk at one of the tour locations being filmed and released on DVD. His latest such film is called Drops Like Stars, which explores "the endlessly complex relationship between suffering and creativity". (Bell has never been one to avoid tricky issues). I've seen the DVD, but Stephanie Moors saw him live, in Tempe last February. And blogged about a part of it. I can't see an excerpt from the post that I can sensibly take out to include here, so I just suggest you read the whole thing; it's not long.

The odd thing about this, is that Be Free Mama looks like a blog about pregnancy and young children. I've been there done that, carry the scars (never let them tell you that the woman has the hardest part of childbirth :) ). I don't have any desire to relive the experience vicariously, thank you very much. So, if I hadn't stepped into the blog in the middle, as it were, I'd never have paid any attention to it. Yet, once I put some time time and effort in properly looking, I found it full of poetry: meditative, spiritual and earthed.

When I first started blogging, it seemed to be easy to find good blogs all over the internet (back when it had a capital 'I'). Now it seems much, much harder (not an original thought). Facebook is fashionable now, of course, but for me it is far too instant, no time for reflection, for thought, for exploration of new and interesting ideas. Lots of bloggers I really liked have stopped blogging, others have said everything once, and are changing their style to avoid repeating themselves.

Of course, it may be that back then blogging was new to me, so I spent more time exploring. Most blogs have sidebars with other blogs of interest; although it does take time to explore the web they form. But the biggest source of useful links, I think, used to be comments. A thoughtful comment on a blog I'm reading, with a link to the commenter's blog, is a reason to follow that link and explore further. Yet, there don't seem to be so many comments on posts now, and those there are tend to be in small close-knit groups. It's as though the internet, once so exciting as it opened up the world, is fragmenting into like-minded groups blogging into their own tight neighbourhoods.