I once knew a middle-aged lady whose marriage fell apart after the kids left home. A while after her husband moved in with someone else she found a lump on her breast ... which she carefully ignored ... and ignored ... until at last she could ignore it no longer.

She underwent treatment for the breast cancer and came through. During her phased return to work they found a secondary in her brain, which killed her. At her funeral a neighbour said:


"It's hard to believe in God when something like this happens."

I knew another middle-aged lady who had a very difficult childhood. In her twenties and early thirties she fought back and thrived, making something special of her life. Then the demons caught up with her, gradually tearing much of what she had achieved apart and eventually killing her:


It's hard to believe in God when the demons win.

I can see the point, but for me it is far harder to not believe in God when such things happen. To not believe in God is to say that disease and demons have the last word.  To me, God is about meaning and purpose even in the midst of destruction and despair, about Resurrection when evil seems to have won.

For those of us who do make it through middle-age there is another 'd' waiting - decay. The longer we live the more we fall apart. In God I can even see meaning in that; but without God there is little to learn, or at least not much future in learning it.

I believe God has the last word: after disease and demons and decay and despair have done their worst, God still has something to say. And God's final word is about hope and love and life and purpose and a new future in a world of justice and peace and meaning.

But sometimes I do feel very, very tired. 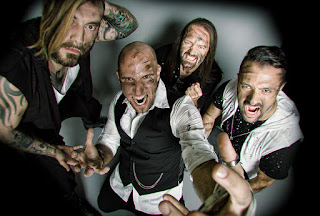 ... and they were absolutely marvellous.

I'm talking about the melodic metal band Serenity, of course (named after the ship in Firefly apparently).

Last night we went to a concert at Koko in Camden to watch Delain headline with Serenity and Cellar Darling in support.

The doors opened late, and it took some time to get the sellout crowd into the venue, so we missed the first half of Cellar Darling's set. Apparently there was some sort of mishap as they started, which may have put them off a little, but they sang several interesting folk-metal songs. Mostly they were accompanied by the hurdy-gurdy, as well as the usual drums and guitars, which made for an original sound; although my favourite song was one accompanied by flute instead (which I now can't remember the name of, sigh). The lead singer is definitely a talented musician.

Serenity were up next and really hit the ground running with Deus Lo Vult,  the highly dramatic instrumental which opens their new Lionheart album, continuing with United from the same album. Four older songs followed before the set peaked with the title track of Lionheart. They finished with Follow Me.

There are lots of things I like about Serenity: they are a really powerful band, musically, vocally and lyrically, yet they understand and use light and shade, heavy and gentle, slow and fast. Their frontman Georg Neuhauser, who is also their songwriter, has a remarkable voice, yet they ring the changes on vocals, with a second male voice in the band and a guest female vocalist for some of the songs.

It helps that Neuhauser is apparently a history lecturer so he has interesting things to say on the historical themes which the band so often sing about. Although it has to be said their Lionheart album is something of a whitewash of Richard the Lionheart, who was a complex and not always honourable leader: the album is more about the legend than the reality.

What about the headliners, Delain? Hmm. Koko was sold out last night, so there was a vast number of people in a limited area. Add to that a bevy of six-footers who felt they had to stand right in the centre, blocking people's view, along with the rudest crowd I have seen at a melodic metal concert: pushing and shoving their way around. I was feeling downright claustrophobic and Delain took forever to come out, so I wasn't at all enjoying myself by the time they did.

It was the last night of the tour and Charlotte Wessels' voice sounded quite badly shot to me, so maybe they had to spend time working on her throat so it could survive one final night, hopefully without damage. Wessels has a very distinct timbre normally, which was missing last night - so much so that at first I wondered if they had a guest singer themselves.

Nevertheless she hit the notes and the whole band sang and played well. A particular treat was that they did have a guest singer: Marco Hietrala, who came out and did the male vocal parts to several songs which they don't normally perform on tour; I especially enjoyed Control The Storm.

I don't really like going to London for concerts, because the journey back is always grim; the wonder of privatised rail: first-class prices for a third class journey. Last night/this morning the train was standing room only - just four coaches so what can one expect - and a points failure outside Slough added to the delight. Still we got home eventually, and it is always good to see live music.

To finish with a bit of enthusiasm: a song which Serenity sadly didn't do last night, but which I think is brilliant:-

Posted by BlackPhi at 22:59 No comments: