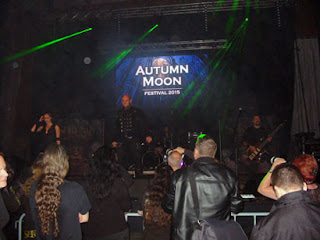 Four weeks ago BlackLin and I went to Hamelin in Germany (of Pied Piper fame) to a music festival there: Autumn Moon, which was sharing a site with the Mystic Halloween Market - of which more anon ... if I ever get to part three of this series of posts.

There was one band we really wanted to see, Lyriel, who only seemed to play in Germany, so if we were to see them we would have to travel. As Autumn Moon was the half term weekend shortly after our thirtieth wedding anniversary, we decided to treat ourselves.

Our lack of German language skills was a bit of a challenge, especially as Hameln is quite a small town so there was limited English spoken, but we managed.

The festival ran on three main sites: the Rattenfängerhalle - Ratcatcher Hall - was the main stage, then there was a smaller stage at the Sumpfblume - Swamp flowers - and a tiny stage on a ship - large barge really. The Mystic Halloween Market also had its own open air stage where some of the bands also played.

At 3pm on Friday things kicked off at the Rattenfängerhalle with Austrian band Serenity, a band who had previously supported Dio which seemed a good sign. They played melodic metal fronted by two vocalists - one male and one female - and were absolutely brilliant. Their music had colour, energy and interesting lyrics (in English). If the festival is using a band this good to open at 3 o'clock in the afternoon, what would the rest of it be like?

After buying a Serenity CD from their merch stall ,we wandered over to the Schiff for WaldKauz, a German folk band. The Autumn Moon website had provided links to YouTube previews of most of the bands, including Waldkauz. They looked okay on YouTube but not that exciting. Live they were far better, although folk in a foreign language has its limitations. Later they also played on the outdoor market stage, which actually suited them better, I thought, than the slightly cramped Schiff.

After that we had a choice: stay on the Schiff for Ye Banished Privateers, or pop across to Sumpfblume to see electro-pop-rock band Tüsn. We chose the latter. Tüsn were basically okay but incredibly pretentious. Fortunately we knew Ye Banished Privateers would be on later in the Rattenfängerhalle.

A bite to eat then back to the boat for Tibetrea: pagan folk with medieval instruments and female harmonies. Actually much better live than their YouTube videos had suggested. Good fun but not as exciting as some of the other folk bands we saw.

Then across to the Rattenfängerhalle for Megahertz: rock with a very deep male singer. Slightly weird but a bit too Alice Cooper for my taste.

I'm flagging by then, to say the least, but the boat had seats, if you didn't mind being a bit far back from the action. So back to the Schiff again for Dunkelschön's take on folk rock. As the name implies they mixed dark and light, with some lovely melodic songs interspersed with some much heavier and rockier tracks. Enjoyable.

Back again to the Rattenfängerhalle for Omnia: more pagan folk, this time from Bohemia. Interestingly their style of folk is quite eclectic and there was a good reggae beat going on at times. Enjoyable but, in spite of some interesting touches, in the end they became a bit repetitive.

We stayed put for the Friday night headline act: Deine Lakaien. Male voice over keyboards mostly; the YouTube video had sounded good but live I found them dull. That said, the hall was packed with people who were having a great time, so it has to be a matter of taste.

We popped over instead to the Sumpfblume to listen to Euzen who gave, I felt, the worst performance we saw that day. They play a kind of female-fronted indie pop. They had sound issues at the beginning; but even after they resolved these initial difficulties their sound remained unbalanced, too loud and frankly rather grim.

The Sumpfblume complex includes a cafeteria so we retreated there for a mysterious snack which turned out to be a kind of extra-thick pancake. Good sustenance for midnight after a couple of disappointing bands.

After Deine Lakaien finished Ye Banished Privateers set up in the middle of the audience area to play some really enjoyable pirate rock. I quite fancied seeing Trollfest, whose video shows them as basically playing bonkers rock/metal (click on the link above to see what I mean), but by then it was half-one in the morning and we were shattered, so we decided to quit while we were on a high from the Privateers.

So, day 1. Ten bands: six decent to good, two that we didn't enjoy, and two really excellent, in very different ways. Not bad for day one of a festival where we didn't know any of the bands before we booked. Oh, and some really interesting and very tasty food along the way.
Posted by BlackPhi at 20:56 No comments: 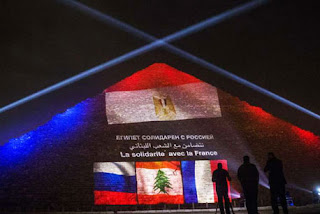 
PS: Clicking on the above image - a pyramid in Giza lit up with the flags of Russia, Lebanon and France - takes you to an extremely depressing list of terrorist attacks so far in 2015. One thing I do notice is that the vast majority are carried out by adherents of one particular extreme sect of Islam against members of more mainstream groupings within Islam - especially against Shia. Blaming Muslims in general for these attacks is about as accurate as blaming Christians for the actions of Westborough Baptist Church; although Wahhabist Salafists do get a lot more funding, thanks to Saudi oil money.
Posted by BlackPhi at 02:08 No comments:


I wonder if Bible Colleges and other theological training centres use TED talks as part of their training in preaching?

A talk with a serious message given by one person with minimal staging and taking less than 20 minutes - for churchgoers among you, does that sound familiar? If I add that the vast majority of TED talks closely engage both the immediate audience and, in many cases, millions of people worldwide then maybe the familiarity decreases.

I've been known to say that the traditional lecture-style sermon is way out-of-date and an appalling way of attempting to engage with modern people in the modern world. There is an elderly and declining population of churchgoers who often like them like that, of course, but I have long argued that a new approach is needed.

In many ways I still believe that: sitting passively consuming the words of a supposed expert is a lousy way to learn. Yet the global success of TED talks does suggest that there is life in the format yet, so I think it's worth looking at some of the typical characteristics of a TED talk.

Pretty much all TED talks are given by people with genuine and obvious enthusiasm and expertise who are speaking about something which they believe matters.

The vast majority have a speaker who moves around the stage, rather than being trapped behind a lectern.

Many TED talks involve some sort of projection/PowerPoint accompaniment, used as a visual backup and complement to the talk itself; whilst the talk remains the main focus.

Many of the talks involve humour - but rarely in the form of isolated jokes, more as ways of making or supporting a particular point.

Some of the talks involve some degree of interaction with the audience, but this is nearly always limited. People want to listen to the speaker and there is a tight timescale.

So I would say it is time for preachers to rethink their methods, congregations to rethink what they ask of their preachers, and occasional visitors to church to give more feedback on how they experience the preaching in that church.

If a preacher doesn't have expertise and enthusiasm then why on earth are they there? If the preacher doesn't make the effort to engage with the congregation through movement, interaction, relevant visuals and/or humour then why should they expect the congregation to engage with them? And if a preacher isn't talking about something which has meaning and importance to listeners and to their neighbours then why is s/he wasting everyone's time?

What do you think?

Posted by BlackPhi at 12:57 No comments: