When Will There Be Justice For The Landless Poor? 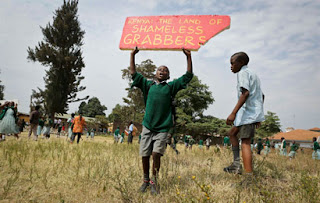 "Blessed are the meek, for they will inherit the earth"

Something like that, anyway. Jesus told a story about workers in a vineyard: casual labourers who worked for a daily rate which was just, and only just, enough to live on. So if you were only hired for part of the day then normally your family went hungry.

Land was important in Biblical times: if you had your own piece of land you hand a chance to grow food for your family. Otherwise, if you were part of the 'landless poor' - a group most English translations unhelpfully render as 'the meek' - then you were destitute, dependent on rich landowners offering work, at the lowest pay possible, or on begging. Even if you had land and were poor, the rich landowners would try to unjustly pressure you until you were forced to sell the land. That's the way the world seems to work; but it wasn't meant to be the way God's people do things.

The idea that everyone had their own little piece of land was fundamental to the way that Jewish society worked – it was their living and their security. That is why the Jewish Law specified that no family could lose their land permanently – every fifty years there was to be a Jubilee when the land was returned.

Of course, this was never followed: throughout Israel’s history the rich acquired the land of the poor and exploited those who were now landless. In Jesus’ day land injustice was a major social issue, as it is today in much of the world (see the picture above for just one example).


Be still before the Lord
and wait patiently for him;
do not fret when people succeed in their ways,
when they carry out their wicked schemes.

Refrain from anger and turn from wrath;
do not fret — it leads only to evil.
For those who are evil will be destroyed,
but those who hope in the Lord will inherit the land.

A little while, and the wicked will be no more;
though you look for them, they will not be found.
But the meek will inherit the land
and enjoy peace and prosperity.

Both the opening beatitude and Psalm 37 tell us that those who are currently oppressed and landless are to wait patiently, trusting that the Lord will provide the inheritance of the land which they need. Their security lies in their faith as they wait for God’s Kingdom to come down to earth and for God’s will to be done here as in heaven.

“The landless poor are secure in God because they shall inherit the land,” is one translation of today's beatitude. But, more generally, it is about those whose relationship with their neighbours, with their society, and with the world around them has been broken by injustice and oppression.

Like the first two beatitudes this is about people who are desperate and without hope in the world being given good news by Jesus: that God keeps his promises and that he will have the last word.

Singer/songwriter Harvey Andrews wrote a song some years back, called Requiem, about the loss of hope that comes with growing older. It included the lyric (about Jesus): “For two thousand years he’s brought nothing but tears, and the crosses to plant on the graves.”

If you have the song (or can play it from Spotify), try playing Requiem, and as you listen consider the lost hopes of your neighbours, whether in Caversham or elsewhere, and how we can restore people’s hope in God.

"Faith, hope and love remain, and the greatest of these is love". May your life be filled with all three in the weeks ahead.