Coffee, Cupcakes & A Glass Of Beer

Whether you have just stumbled across this blog, or have come over from my old blog on Blog City, I'm pleased to see you. I was thinking what to do for my first post here (yesterday's Israel/Palestine entry was just copied over as a test), and I thought, "What would I want to share with a visitor to a new home? Coffee would be good, and why not bake some cakes - 'fairy cakes' in the UK, 'cupcakes' in the rest of the world - and, if the sun's over the yardarm, maybe even a cool (but not cold) glass of beer." 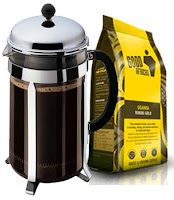 Let's start with a mug of Good African Coffee's Rukoki Gold. I enjoy a good cup of coffee, but don't see why my enjoyment should be based on the exploitation of some poor farmer. I appreciate having the ability to feed, clothe and educate my family, and reckon s/he should be able to do the same for his/hers, so for many years I have drunk fair trade coffees. A few months ago, I came across Good African Coffee, which is an African owned coffee producer where the 'added-value' processing is also done in Africa. To quote one of their taglines, "Africa needs trade not aid". It's also really good coffee.

Fairy cakes are really easy to make, and home made ones just taste so much better than shop-bought. Simply cream 4oz castor sugar with 4oz butter (100g of each will do nicely instead), and beat in 2 eggs, a little at a time. Then fold in 4oz (or 100g) self raising flour using a metal spoon. Two-thirds fill 12 to 16 paper cake cases with the resulting mixture and bake in an oven at 190C (375F) for 15-20 minutes, until golden brown. You can throw in sultanas, or currants, or cherries, or cocoa powder, or whatever for variation (before cooking!), and can decorate the top with icing or whatever to make them look even prettier (after cooking). The only problem being that hot cakes taste so much better than cold (hence "selling like ..."), so you might have to make some more for your visitors, if you aren't so good at resisting temptation. 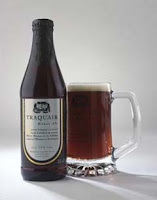 If I've been able to get hold of some Traquair House Ale, and I'm feeling really hospitable, you could be in for a treat. They brew it up in the Scottish Borders (oddly enough at Traquair House). They don't brew very much each year, and the vast majority of what they do brew is, I'm told, exported. If you can get hold of it, though, it's sheer nectar. It's strong, ABV 7.2%, but beautifully balanced with an enormously rich flavour.

And while we eat and drink, we can chat. Why not tell me what you like as a food or drink treat? The comment box is free and waiting.
Posted by BlackPhi at 12:11 5 comments:

Two-State Solution? Who Are They Kidding?

According to the BBC (who say their data comes from the OCHA), Israel now fully controls 62% of the West Bank; of the remaining 38% more than half is under Israeli security control. There are 149 authorised Israeli settlements in the West bank, and 100 'unauthorised outposts' - all illegal under international law. The population of the West Bank is 2.4 million Palestinians and 500,000 Jewish/Israeli settlers. It looks to me as though this data comes from the OHCA's report The Humanitarian Impact On Palestinians Of Israeli Settlements and Other Infrastructure In The West Bank (large pdf file), published in 2007. If so, and if I read the report correctly, then the BBC have their figures the wrong way around: Israel directly controls over 38% of the West bank and has security control over more than half of the remaining 62%. Although Israeli settlements have grown significantly since 2007, so these figures will be underestimates.

Meanwhile in Washington, Ramallah and Jerusalem negotiators make a lot of fuss about the supposed partial settlement freeze coming to an end.

Just for clarity, here is the introduction to Annex I of the OCHA report:

A key part of the Israeli occupation of the West Bank is its appropriation of water resources, where Israeli settlers get the lions' share. For example, from the Western Aquifier, which lies under both Israel and the West bank, of the 362 million cubic metres pa pumped, just 22 mcm pa is for Palestinian use, the remaining 340 mcm pa is reserved for Israeli use. Water supplies to Palestinian towns are largely controlled by Mekorot, an Israeli firm which prioritises Israeli customers when water supplies are short.

The facts on the ground in Israel and Palestine are clear: Israel has no interest in a two-state solution, all it wants to do is to pressure more and more Palestinians into leaving their homes, whilst extending its settler presence throughout all the land it wants to appropriate. To anyone familiar with the history of apartheid in South Africa the strategy is all too plain.

A two-state solution which included a viable Palestinian state once looked a workable approach to the Israel/Palestine problem. Now it has been overtaken by events, and it is time to move toward a single state solution which is non-racist and fully democratic. Then all sides can have their capital in Jerusalem.

Posted by BlackPhi at 15:40 No comments: