So this post is intended to be a quick (-ish) summary of where I'm at now, at the start of this shared process - obviously this is something we've been looking at ourselves for a while, so none of us are really starting from a blank sheet.

In the best church tradition, I'll do this as three points ... or maybe just three different angles.

The first part is simply the idea mentioned above: that St John's needs to be a community church. Not a church defined by it's walls, although they give a good local focus; nor by its churchgoers, although they are its lifeblood; but by the community it engages with, serves, and works with.

Churches just 'serving' their local community sometimes lose the plot, because that's not really how people work. It is in working in partnership with people that all grow and all can use their talents together in the most effective ways. I was listening to a lady from Greyfriars a couple of weeks ago who spoke of "a church without walls", which conveys the idea nicely.

The next point is about numbers. I think we need a decent sized core congregation to provide the foundation (in Jesus, of course), stability and direction for the work. I see that as being around 100 people over a couple of congregations. Any larger and the thing becomes an all-devouring monster, in my view. But we are within a community of over 9,000 people, so if we are to be really effective we will need to involve and include much more than that core congregation.

Currently we take part in a number of initiatives which are separate from the core of the church and are run in partnership with those who go to other churches or none: there's a 'cooking club' on the Amersham Road estate, which is intended to grow into a 'fresh expression' but needs resource to really progress; there is the 'community cafe' on Tuesdays, which could usefully run on other days of the week; there is a 'food for families' group using part of the church grounds. All of these involve us, are separate from the church organisation, and have great potential to grow and do much, much more if more people got involved.

I see this as the best model going forward: a kind of 'hub and satellites' picture. Something where people who 'don't go to church' can live and grow as enthusiastic followers of Jesus without getting bogged down in all the 'religious' stuff.

The final point is not about organisation or about models, but about who we are especially there for. Who we can work with to be life-giving and grace-transmitting. To my mind the priority should be those who are lonely and lost in our neighbourhoods; those who feel worthless and rejected; those with enormous creativity and love to bring to the table, but who don't feel they belong enough to have the right outlet. Those whom God especially loves because religious people have traditionally turned their backs on them.

The thought of partnering with people from Greyfriars to reach those in need of such life-giving inclusion and welcome is one I find concerning*. But that is the nature of God's Kingdom: it moves forward through the most unexpected people.

To finish, the final verse and chorus from the Bad Pollyanna song above, which I think says a lot about what churches should be relaying to their communities:

Because that's what Jesus says ... to you and to those around you.

* NB 'Concern' does not equal rejection, more an appreciation that God's way sometimes involves a degree of surprise. It seems likely that those considering moving to St John's will have concerns of their own, of course.

Posted by BlackPhi at 14:30 No comments: 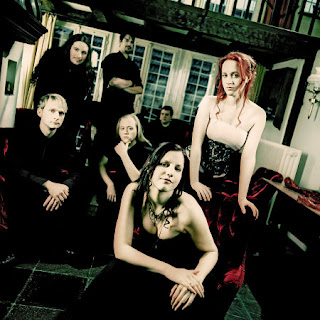 Two roads diverged in a yellow wood
And sorry I could not travel both
And be one traveler, long I stood
And looked down one as far as I could

Lyriel's Leverage album is sometimes seen as a transitional work between their earlier 'folk metal' and the heavier more Gothic metal of Skin and Bones. A good track to illustrate this, perhaps, is The Road Not Taken with its journey from acoustic guitar and strings to full-band metal for the final chorus.

Be that as it may, this is an interesting track lyrically, based as it is on the apparently deliberate (and possibly fatal) ambiguity of Robert Frost's 1915 poem.

Both song and poem end on the phrase, "Two roads diverged in a wood, and I - I took the one less travelled by, and that has made all the difference".

In our time of celebration of difference and our felt right to make our own choices, this lyric is often seen as telling us to walk our own distinct way and choose our own unique destiny. Yet, according to Frost's biographer, Lawrance Thompson, the poem is based on Frost's indecisive friend Edward Thomas, who "whichever road he went, would be sorry he didn't go the other." So the original poem is about the waste of energy in pointless regret, always looking back and worrying about "what if".

Which way does the Lyriel song lean? It is, of course, hard to tell as they retain the ambiguity in their selection of lines from the poem.

But there may be a pointer in the final song on the Leverage album, Repentance. This features the following lyric:


"Repentance is a path that we can not walk for long, my dear. ... Come with me and I will show you how to choose a side."

So maybe their take is that you can only waste energy worrying about the past for so long, before you need to commit to one path or the other.

Of course I may just be projecting my own views onto this - it is easily done.

Because I have undoubtedly wasted time and energy myself second-guessing choices already made. Somewhere there is a balance between flexibility and commitment and I don't always hit it, I know.

From a Christian point of view, our calling is to serve God through Jesus wherever we are, in whatever circumstance. It makes sense to seek God's will for the future perhaps, but not to stress too much about it. He is with us wherever we are and, I think, he most appreciates working with us on the choices that we ourselves make and are fully committed to.

So our calling is to commit to our path with God, here and now. Not to worry overmuch about either past or future, but to be fully present in, well, the present. That's where we can make a difference.

Frost's indecisive friend, Edward Thomas, finally decided to commit to signing up for the First World War shortly after, where he was duly killed on the first day of the Battle of Arras. The story is told in this rather interesting article in the Guardian. After finally enlisting he sat down with a friend and told her that he was glad to have made the decision, he didn't know why but he was glad.


Things will happen which will trample and pierce, but I shall go on, something that is here and there like the wind, something unconquerable, something not to be separated from the dark earth and the light sky, a strong citizen of infinity and eternity.