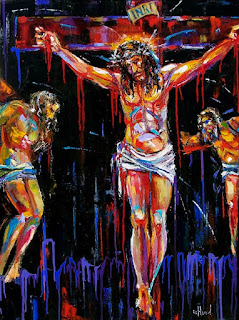 Blessed are those who are persecuted for righteousness’ sake, for theirs is the kingdom of heaven

Just because you are accepted by God doesn’t mean you will be acceptable to the world.

Just because you do things in line with God’s will doesn’t mean the powers of the world will treat you well.

Just because you are becoming like Jesus that doesn’t mean religious and secular authorities will deal with you any differently to the way they treated Jesus … and Stephen, and Paul, and many, many more followers since.

So why is it that here in Caversham (maybe where you live too?) the authorities just leave us to get on our churchgoing? What is it about our expression of faith that the authorities see as safe and unthreatening to their status and power?

This final beatitude both circles back to the first and looks forward to the next section of Jesus’ teaching in his 'sermon on the mount'.

It circles back by showing that as Jesus’ followers are persecuted, excluded and marginalised by religious authorities, so they are among the ‘poor in spirit’ whose place in God’s kingdom is already given. The world attempts to destroy our hope but Jesus guarantees it.

At the time Matthew wrote this Jesus’ followers had suffered a generation or more of persecution from religious leaders of the day and their inappropriately zealous followers. The idea that those who they considered unworthy – “Gentiles and sinners” - might be acceptable to God was just too much for them to accept.

Today, if we want to live like Jesus then we need to be open-eyed and pure-hearted about whose side he was on: the victim and never the bully, the outsider and never the excluder, the poor and never the oppressor.

This beatitude also looks forward in defiance: the world may persecute you for being like Jesus but you remain salt and light, so live as such and don’t pretend or disguise your Christ-likeness. Live in Grace but excel in Godliness, so that all may see Jesus in your faith and in your persecution.

Finally, we are called to love those who persecute us – who but a madman or a Christian would do such a thing?