Framing Scripture I - The Road To Jericho 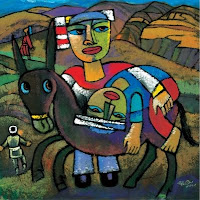 I do get frustrated when people rip bits out of the Bible and try to justify or make arguments with them without considering their context. At its worst this is simple 'proof-texting' - essentially taking an opinion then trying to claim that "God agrees with me and here's the proof". But even fuller consideration of a passage can completely miss the point if done without looking at its proper framing.


A man was going down from Jerusalem to Jericho, when he was attacked by robbers. They stripped him of his clothes, beat him and went away, leaving him half dead. A priest happened to be going down the same road, and when he saw the man, he passed by on the other side. So too, a Levite, when he came to the place and saw him, passed by on the other side. But a Samaritan, as he travelled, came where the man was; and when he saw him, he took pity on him. He went to him and bandaged his wounds, pouring on oil and wine. Then he put the man on his own donkey, brought him to an inn and took care of him. The next day he took out two denarii and gave them to the innkeeper. ‘Look after him,’ he said, ‘and when I return, I will reimburse you for any extra expense you may have.’

What is this? It looks like a news report of a mugging and its aftermath. There are those who want to treat the entire Bible as a combination of news report, science manual, and rulebook, yet most Scripture is so much richer than that.

To understand this story we need to look at its frame, the text before and after:


On one occasion an expert in the law stood up to test Jesus. “Teacher,” he asked, “what must I do to inherit eternal life?”
“What is written in the Law?” he replied. “How do you read it?”
He answered, “‘Love the Lord your God with all your heart and with all your soul and with all your strength and with all your mind’; and, ‘Love your neighbour as yourself.’”
“You have answered correctly,” Jesus replied. “Do this and you will live.”
But he wanted to justify himself, so he asked Jesus, “And who is my neighbour?”
In reply Jesus said:

“Which of these three do you think was a neighbour to the man who fell into the hands of robbers?”
The expert in the law replied, “The one who had mercy on him.”
Jesus told him, “Go and do likewise."

Clearly it is a teaching story, about loving your neighbour, not a factual news report. That's what the story frame tells us.

In the wider context of our knowledge of the prejudices of the time, we know that Samaritans were scorned by many Jews, which gives the story its punch. But we can also read Luke's writings more broadly and see the emphasis on Jesus' acceptance of those who were, for various reasons, seen as 'outsiders' and scorned, and their inclusion into the early church. There is even a context in Jewish history where something very similar to this story - although on a larger scale - actually happened following a battle between Judea and Samaria (see 2 Chronicles 28:10-15).

Context and framing matter for anyone who truly wants to understand the Scriptures, or even to avoid being misled about what the Bible says.

Actually, there is a much bigger frame - or more accurately two frames - which go around the whole of Bible itself. Just as you cannot expect anyone to understand Luke's story of a mugging victim without seeing the story frame that fits around it, so you need to recognise the overall framing narrative of the whole Bible to gain a proper perspective on all it tells us.