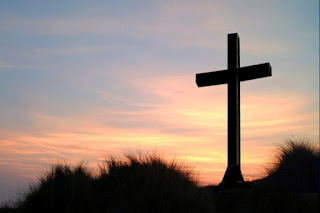 The end is nigh! This is the final week of the CTM Parish's Mark sermon series, as we come to the end of Mark's Gospel. Of course, we all know how the story ends - it's pretty much summed up in the title above ... isn't it?

Except that Mark doesn't really tell it that way.

At the end of last week's instalment, the trap had closed - Jesus was on his own, betrayed, abandoned and captured. The religious authorities had taken him and planned to exact their revenge. The outlook was bleak.

They give Jesus a mockery of a trial, and are still having trouble making their case. So Jesus helps them out, agreeing that he is "the Messiah, the Son of the Blessed One." A reminder that Jesus is no helpless victim in this process; he has been prodding and poking and shaming the religious leaders to provoke a reaction from the beginning. He is not letting them off the hook now: they can choose to do evil or they can choose to do good, but they must choose.

Off to Pilate, the local leader of the occupying Roman power. He is playing his own games, but has no interest in blocking a determined drive by the native powers-that-be. Jesus is tortured, mocked and condemned to death.

Then they crucify Jesus.

There's more mockery, mostly along the lines of 'if Jesus is really who he says then he'll come down off the cross and avoid the suffering and death'. Maybe it's a cry of anyone faced with suffering: surely if God loves us then he would save us from this. Yet Jesus is telling us - as he has told us before - that in God's upside-down Kingdom life comes through death, and healing through wounds.

Mark's readers in Rome had been forced to endure terrible suffering and loss: they had made it through, but how to make sense of the cost? Mark, as ever, doesn't give a clear explanation, he just shows Jesus on a cross. Jesus quoting an ancient Hebrew song: a song which begins in lonely suffering - "My God, my God, why have you forsaken me?" - but ends in vindication and triumph, "All the ends of the earth shall remember and turn to the Lord; and all the families of the nations shall worship before him."

The sun goes dark, Jesus breathes his last, and the curtain in the Temple is torn in two. Just as the heavens had been torn apart at Jesus baptism, for God to affirm Jesus as his son, now the veil of the Temple - symbolically separating God from the people - is torn apart, and the foreign NCO in charge of the execution squad affirms Jesus as God's son.

It's strangers and religious leaders who have condemned Jesus, but it is also strangers and a religious leader who help him: Simon of Cyrene who carries his cross, the unnamed centurion who tells his identity, and now Joseph of Arimathea lays Jesus in his tomb. Women - two Marys - look on.

After the Sabbath is over the story takes a twist: the tomb is empty, Jesus is not there.

Our best estimate of the original ending is that the three women were told to tell the disciples that Jesus had been raised and is going ahead of them to Galilee, but they "said nothing to anyone, for they were afraid." That's it: the alternative endings given in most Bibles are believed to be later additions.

But how can the story be known, how can Jesus' resurrection be known, if the women kept silent? That's the point, of course. They were terribly afraid, they wanted to keep silent, but at some point they must have spoken out anyway. And so the Church began.

In late 60's Rome Christians were terribly afraid, they would have wanted to keep silent, but what would they actually do? Can the Church carry on? Mark's Gospel is open ended.

In early 21st-Century Britain many Christians seem ... unwilling to speak up; at least those who are not modern day Pharisees. Uncertainty about what it all means, doubt about the place of faith in a secular world, unwillingness to force one's beliefs onto another, many different reasons perhaps.

But if the end result is that those who faithfully and lovingly follow Jesus are not heard, if the message of God's Grace through Jesus is drowned out, how can the Church continue?

Now, as then, Mark's Gospel remains open-ended.
Posted by BlackPhi at 13:00