Mark: Not The End 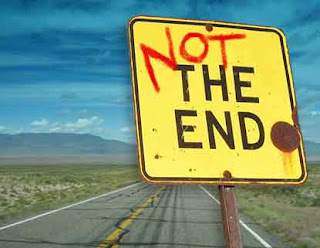 The 'end' of Mark's Gospel is odd, doubly so.

Firstly, the original ends very strangely and, secondly, later editors have stuffed on a couple of extra bits, to try to 'correct' the strange original.


"Don't be alarmed," he said, "You are looking for Jesus the Nazerene, who was crucified. He has risen! He is not here. See the place where they laid him. But go, tell his disciples and Peter. He is going ahead of you into Galilee. There you will see him, just as he told you."

Trembling and bewildered, the women went out and fled from the tomb. They said nothing to anyone, because they were afraid.

What sort of ending is that? Who would end a story this way?

As Mark told us, way back at the start, this 'Gospel' is the beginning of the good news of Jesus, Messiah, Son of God. We are, or can be, part of the continuation of that good news.

Mark's readers knew that the women had overcome their fear, moved past their initial reluctance, and told the disciples. They knew because they already knew the story - Peter had been with them in Rome for several years before he was executed.

Mark's story ends with an implicit question - what will the women do - to which his readers knew the answer. But Mark is also asking the Christians in Rome a question - will they give up after the persecution they have been through or will they carry on, however confused, upset and afraid they are feeling? We know now that the church in Rome continued and grew; but now the question is passed on to us. What will we do with the good news of Jesus? Will we pass it on, or does it end with us?

The 21st-Century church in Britain has different problems, different confusions, different worries, but I think it is fair to say that things haven't gone the way we'd have expected or hoped in recent decades. If we're really honest, the church hasn't done a particularly good job over many years, certainly not in following the example we've seen Jesus set in Mark's Gospel.

Just as Jesus told the disciples, it's time to go back to basics, to return to Galilee to meet him there and start again. The disciples hadn't done particularly well, but they had endured and God could use them. Maybe we haven't done that well in following Jesus in confusing times either, but God can use us.

Where is your Galilee? What lies at the beginning of your journey of faith, and where is its heart? How can you rediscover that simple walk with Jesus, that early enthusiasm, that honest appreciation of the life that Jesus brings? And how will you pass that on?