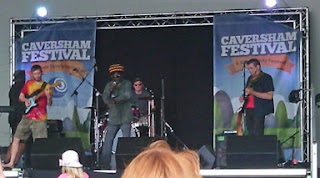 I keep forgetting just how good some of Readipop's bands are. Fortunately I got a reminder today at the Caversham Festival, over in Christchurch Meadows.

Less fortunately, there was the usual problem of multiple stages meaning that some of the best-sounding bands overlapped, so I missed a lot. Nevertheless, I heard some excellent music, and discovered some bands to keep an eye out for.

The first band I came across, on the Festival Stage, was Area 52. Sadly I arrived at the end of the set, so I only heard one song, but they were impressively together, full of energy, and exciting. I was able to pick up their CD afterwards, which is a good listen.

Over at the Indian Marquee, I heard part of Military Arcade's set: decent pop-punk, but not really my cup of tea, followed by Unorfadox playing (fairly orthodox, I felt) classic rock.

I'm not really a big fan of reggae - I find the rhythm section tends to be a little monotonous, leaving all the creativity to vocals and lead guitar. However, The Majestic really were (majestic, that is). Excellent music, impressive stage presence (it's no surprise to find that leader singer Faada Ras has been performing live since the eighties), and a positive, uplifting message meant that the sizeable crowd had a good time - especially all the youngsters dancing at the front.

Watching the end of The Majestic's set meant I missed most of Jakabo's :( Zepellinesque rock with excellent guitar and a female vocalist (the best Zeppelin-style singers tend to be female, I find ... except the young Robert Plant, of course), the end of their set was a full of energy and audience interaction. I just wish they'd been on half-an-hour later.

Caversham Festival was heaving by late afternoon, which has to be good for the festival's prospects. If you didn't make it today, the festival continues tomorrow down at Christchurch Meadow. As well as music, there are loads of miscellaneous stalls, comedy, drama, weird boats followed by monsters, and lots of food. Well worth a visit.

One of the odd things I find with good live music in a relaxed setting is that you get a small insight into peoples' stories, through their interactions. Just glimpses of story without beginning or ending - totally unlike books and films - simply brief flashes of lives. A chance to hope and pray for God to touch, bringing his expansiveness: an experience of life lived more fully. What could be better, on this sunny summer afternoon.

Grace and peace to you. 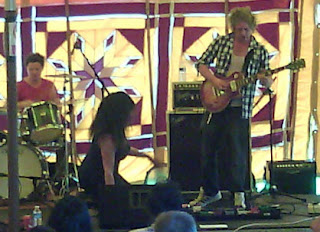