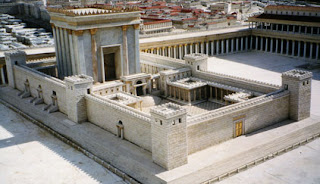 As if the cleansing of the Temple, which we heard about last week, wasn't enough, now Jesus is saying that God has withdrawn his protection from his Temple.

The Temple at Jerusalem was at the heart of Jewish national and religious identity. It was also politically controversial: rebuilt, in the traditional despot architectural style, by Herod, a Roman imposed ruler, and run (corruptly) by Caiaphas and his family, Roman imposed high priests.

Jesus has signed his own death warrant.

Jesus follows this up by warning his followers that they too will suffer terrible persecution. When the religious and political leaderships connive together to murder the innocent out of expedience, then great suffering and destruction will follow before things can improve. Mark's readers, of course, will have seen this for themselves; their only comfort is "The one who endures to the end will be saved."

Then the authorities find the opportunity they have been waiting for: Judas can be suborned. There looks to be unwritten backstory here, but the important thing is that now the religious leaders have the information they need to strike: in darkness and secrecy, because that's how the corrupt work.

In the meantime Jesus and the twelve come together for their Passover meal, what would later become known as the Last Supper, the precursor of the Eucharist, or Holy Communion. Jesus knows he is about to be betrayed yet he includes Judas in the fellowship meal. As the next section of chapter 14 shows, Jesus is also aware that Peter will deny him and that the remainder of the Twelve will desert him, scattered like sheep. Yet all are included in that Last Supper.

There is a really ugly misrepresentation of something the apostle Paul wrote to the church at Corinth, which claims that you have to be 'worthy' to take part in the Eucharist. This is about as far from the reality of the Last Supper as you can get. Jesus knew his followers and their weakness, but still he ate in unity with them (which was actually Paul's point as well).

There is a version of the invitation to take part in Communion used by some churches which captures this rather well:

Come, not because any goodness of your own gives you a right to come, but because you need mercy and help.

Come, because you love the Lord a little and would like to love him more.

Come, because he loved you and gave himself for you.

Come and meet the risen Christ, for we are his Body.

Jesus shared his Last Supper with his betrayer, his denier and friends who would desert him in his hour of need. Can you really say that you are less worthy than them?

By the end of our passages for the sermon series this week, Jesus is on his own: "All of them deserted him and fled." The trap has closed and the 'victim' is caught. Jesus is close to defeat and death ... in God's upside-down kingdom he knows that is the road that leads to life.

But for this week, this chapter, we leave Jesus alone, trapped, abandoned. It is a difficult story, when we truly enter into it.
Posted by BlackPhi at 13:08