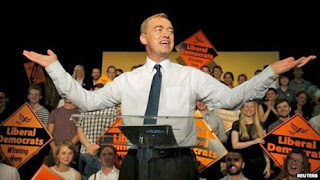 Tim Farron, the new Lib-Dem leader seems to be getting a lot of stick for being an evangelical Christian. In particular, he has been quizzed on his views on homosexuality and been seen as evasive because when asked if homosexual sex is a sin he would only answer that "my firm belief is that we are all sinners." It doesn't help that he has apparently abstained on an earlier vote affecting gay marriage.

I know very little about Tim Farron except that he was one of the minority of Lib-Dem MPs who actually kept their promise to vote against tuition fee rises.

I also know that Christianity, even evangelical Christianity, is a broad church with a wide range of views concerning homosexuality and gay marriage. The commonest view, certainly in my experience, is that peoples' private sexual behaviour is their own business. As Jesus (and Paul) said, "Do not judge."

One would certainly expect that a Christian who self-identifies as an old-style social liberal would be strongly in favour of equal rights for all minorities, including LGBT+ individuals. Indeed, Farron claims that he abstained from that gay marriage vote because it didn't go far enough.

What got me thinking, though, was the link between "we are all sinners" and the sinfulness, or otherwise, of homosexual sex.

Jesus was often asked questions as a 'test' or a 'trap', and refused to go along with the underlying assumptions. That's often the difficulty with these binary, yes/no, challenges - either answer affirms an invalid viewpoint. Jesus often replied with a question or a story, but he's rather better at that than I am, and probably than Farron is. So what might Farron be getting at?

I think that the problem with the "is homosexual sex sinful" question is that it ignores the relationship. In effect it reduces two people to their sexual organs and nothing else, which is a terrible, reductionist thing to do with people who are made in God's image.

When you look at a couple who claim to love one another in terms of their relationship, then you have some sort of basis for talking about Jesus and about sin. Jesus spoke about lustful thoughts, and anger as internal equivalents of adultery and murder. Paul spoke about greed and selfishness as being idolatry. And Jesus is clear that, as far as he is concerned, it is these things which come from within which are defiling, sinful, rather than the externals.

'Sin' is a tricky word to fling around, but it is reasonable to suggest that any relationship which involves lust, anger, selfishness or greed is a relationship of sinners. I hope that my own marriage also includes a lot of positive stuff, but there is no doubt that these elements are there too. We are sinners. Maybe there is a homosexual couple out there who are able to avoid these traps: if so, their relationship is clearly less sinful than mine.

In a Christian context what matters is God's grace and I see nothing anywhere in the Bible to suggest that God lavishes his grace any less on sexual minorities than on anyone else. God deals lovingly with people and relationships, not labels and prejudices.