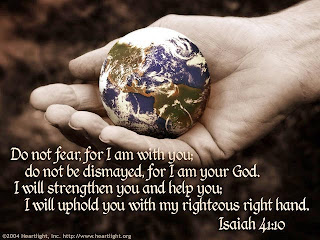 How can you prove that God exists? As someone who trained as a scientist and works as an engineer, I'd say the easiest way to prove something is to see the difference between when it is supposedly present and when it is absent. Except that the classical Christian understanding of God is that he is not just the creator of the universe, but its sustainer too: the one who keeps everything going. So if God stopped doing what he does, then the universe would end. As tests go that's a bit drastic, especially since we wouldn't be around to see the result.

So one could say that the primary evidence for God's existence is a universe that exists and functions in an orderly and comprehensible way. But that is also the prerequisite (presumably) for the existence of intelligent creatures who can look at their universe, describe it mathematically,  and wonder about the existence of God. An orderly universe is barely perceived; in many ways it is just background. Telling the difference between a universe created by God and one which just happens to exist and to be friendly to sentient life is tricky.

Maybe we need a bit more information about God, so we can deduce whether the universe reflects his/her/its supposed characteristics. At first sight that should be easy, for the God described in the Christian Bible is one whose primary characteristic is love. If God is love - and light and life and all that sort of thing - then we would expect a universe, and a world, powered by love.

I trained as a physicist, and a physics view on the universe is filled with 'wow' factors: with wonder at the amazing variety and scale of creation; at the way that it manages to be both simple in overview and fascinatingly complex as we look deeper (it is so implausible that we should be able to describe an infinite universe with simple mathematical laws); and at the apparent 'fine-tuning' which means this world in this universe is incredibly well-suited to intelligent human beings, who can look at, wonder at, and measure all the amazing things around us.

However, I am also very interested in biology, in the natural living world. There the dominant driver is death ... death and reproduction specifically. The living world around us is filled with violence and with insidious and cruel parasites. The 'circle of life', of Lion King fame, is all about living things consuming other living things, around and around again. Yet ... there is also great beauty and great wonder in our natural world. It is not a simple, unambiguous place.

As for people: look at the news, and look at what is going on in your community. There are people doing wonderful, heroic, caring things; and there are people comitting appalling acts of selfishness, cruelty and ugliness.

The Bible explains the inconsistency by saying that God originally created the world to be "very good", but that - somehow - it all went wrong, and death came onto the scene.  It tells us that God has a plan to put it all right, through Jesus, and that in due course that plan will be fulfilled. In the meantime "creation groans", we are told, as it waits for "liberation from its bondage to decay", because God is "not wanting anyone to perish". So there is hope, with the Biblical God, that the world will be made right but, in the meantime, the evidence for a God of love remains as ambiguous as the world itself.

There are a number of philosophical arguments which claim to prove God's existence intellectually, you can find a good summary here. As an ex-atheist - indeed, as a 'grubby-fingered engineer' - I find them unconvincing. Others disagree, so they are worth a look.

Which brings us to personal experience. In my self-description above as an ex-atheist, the 'ex' bit is mainly because I had a powerful experience of God's presence. That is not scientific evidence for God's existence - it's not predictable, nor reproducible, nor even objectively measurable - but it is still evidence. Many other people have also experienced God's presence for themselves. Yet there are also many, amongst those who believe in God and who follow Jesus, for whom God's presence is a vague and uncertain thing: not everyone has had an intense experience; I suspect it is a majority who have not.

Yet for many who follow Jesus - or who believe in God in a less-defined way - there is still a definite feeling of something or someone who is with them, especially when life is at its hardest; someone or something who cares for them and is on their side; perhaps some source of hope that things will get better, that present troubles are not the last word, or, failing that, just a 'hand' to cling to when all else fails.

Perhaps the most convincing evidence, if looked at fairly, is the church, the community of Jesus' followers. Don't get me wrong, I am all too aware that there are terrible problems with organised religion, and fallible people get things wrong, and cruel and evil people use churches as a cover for their cruelty and evil. But behind all that, at a grass-roots level, there are large numbers of people giving their time, money and skills to help other people, often people who are neglected and considered worthless by the wider societies we live in.

Non-religious people care for others as well, of course, as do people of non-Christian faiths, but I would argue that the sheer numbers and dedication of people striving to help unrelated people in God's name is, in itself, a miracle and a sign that more is going on in this world than can be explained in material terms alone.
Posted by BlackPhi at 12:23 No comments: Links to this post