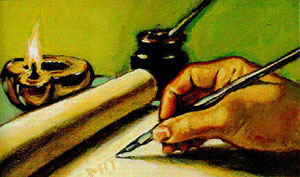 I've been working quite intensively with Mark's Gospel over several months now, in detail and - especially - as a whole, and I'm left with the feeling that I never really knew it before. It is so much less a simple history or biography and so much more an open-ended account filled with pace and emotion, confusion, uncertainty and pain. So I wonder, why did Mark write it?

Something we may not realise about those days is that written records of people and events were seen as much less reliable than an oral history. A document is written by just one person, often with an axe to grind, whereas an oral record is owned and protected by the community. An oral record will typically be formed and shaped by eye-witnesses, then told and retold amongst people who have heard it before and will complain about changes and inaccuracies. So why would Mark write down what Jesus did?

As I said above, an oral record is trusted because it is owned and protected by its community. During the early-to-mid sixties AD the community in Rome was heavily persecuted, its leaders executed, and its members scattered. Then the communities in Galilee and Judea got caught up in the Jewish rebellion from 66 AD. And in 68 and 69 AD, following Nero's suicide, the empire as a whole faced an ensuing civil war, including Antioch and Alexandria, two more centres of Christian community.

So the oral record was being damaged, at just the time that key eye witnesses were being killed (or just dying). Mark had been very close to Peter and Paul in Rome and knew their stories about Jesus well ... but there was no guarantee he would survive himself. So a written record is the lesser of two evils: at least there would still have been enough eye witnesses, and those who had heard the eye witness stories, to attest to the truthfulness of Mark's retelling.

But Mark's Gospel is about more than that.

From Paul's early letters it is clear that many in the early churches expected Jesus to return within their lifetimes - thirty-odd years had gone by since Jesus' resurrection, what was going on?

More important though would have been the terrible suffering the Christian community in Rome had gone through, that the communities in Galilee and Judea were going through, and that communities in Syria and Egypt would have been afraid would come to them soon. These were people living good lives as they followed Jesus together and awaited his return; why were they suffering?

I think that is the key question behind Mark's telling of the events of Jesus' ministry. One person's written record may be less reliable than a community's telling, but it is more useful for making a point.

Mark's Gospel account says it is the beginning of good news, not the end. It says it is about Jesus who is the Messiah, the Son of God, affirmed by God and by man. But this Jesus suffered and died, and tells his followers that they too will suffer and die. Following Jesus doesn't protect you from suffering and persecution, it makes it more likely!

Mark's account shows the disciples permanently confused, always a step or two behind, often afraid. Jesus, meanwhile, keeps talking about an upside down Kingdom where death is the path to life and humiliation is the path to glory - exactly the kind of things which had been happening in Rome.

Mark is telling his readers not to get discouraged, their experience is not a sign that God's plan has gone wrong, but a sign that it is progressing.

If the disciples were shown as confused and afraid, how much more was Peter the one who always seemed to get things wrong. Yet Mark's readers had known a Peter who was the strong leader of their church; Peter had denied Jesus once, now he had willingly given his life for him. If Peter can change like that then so can any of them.

Mark leaves his writing open-ended: will the women overcome their fear and confusion and tell their story? Will the disciples go back to Galilee, to meet Jesus in their daily lives and to continue to follow him there? Will the Christian community in Rome, and throughout the empire, be able to go back to their lives? Will they be able to find Jesus there, in the midst of devastation, and can they walk with him again?

"Why?" remains a live question today. Mark provides no simple answer, but points to a person; a person who leads us through an upside-down world toward a Kingdom of justice and peace. His question is: "Will you follow?".
Posted by BlackPhi at 14:24