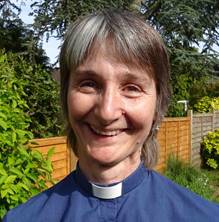 I'm too tired at present to construct any sort of ordered post, so it'll have to be a general ramble.

I was at a wonderful church service last night where Rev Penny Cuthbert was licensed and installed as Transition Minister for St John's, serving Caversham as a whole but particularly the communities traditionally associated with St John's in Eastern Caversham (by which I mean roughly the area bounded by Westfield Road, Emmer Green & CPV and the river).

The service was inspiring, the bishop spoke well, and the large congregation - church-goers and non-churchgoers - responded with openness and welcome. The next three years are going to be difficult and challenging times, but I certainly felt strongly the presence of God with us as we set out on that journey.

A couple of discoveries have really set me back on my heels in recent months. The first is that Eastern Caversham has about 9,000 people living there, in about 4,200 households. That is a lot more than I had expected, and equates to a lot of individual stories. It also makes St John's average Sunday congregation over the past year a little less than half a percent of the community we are meant to serve.

The second is that there are apparently at least a couple of hundred churchgoers in Eastern Caversham who cross the river every Sunday to attend worship at town-centre churches, mostly Greyfriars.

I became a Christian at St Aldates in Oxford, in some ways similar to Greyfriars as a city-centre student-friendly church; except at St Aldates, back then at least, there was a strong vision that they discipled the people who came through their doors - like me - trained us up, and sent us out to serve God's Kingdom in our local churches. So I find Greyfriars' apparently more acquisitive approach somewhat disconcerting.

Even more disconcerting is that I have seen no evidence for their presence in Caversham. Granted, I actually live in a different corner of Caversham, but surely hundreds of people working for the Kingdom of God in their local community should show up on the radar, shouldn't they? How could God's people - his light on a hill, salt and yeast for their communities - possibly be invisible?

One reason I have been using the term 'Eastern Caversham' rather than the more usual 'Lower Caversham' is that the St John's district actually covers a lot more ground than just the flood plain area to the south.

As small churches, St John's and the neighbouring Methodist church have partnered in focussing their resources on a small part of the area, to the south-east. As a place to start this, one of the poorer areas of Caversham, makes sense as a beginning for the local work of the Kingdom. But the rest of the area needs to hear and see God's love too.

I was going to use this ramble to record a few half-ideas toward achieving that but it's already getting a bit long and my brain is fogging, so maybe next time.

Grace and peace.
Posted by BlackPhi at 12:11