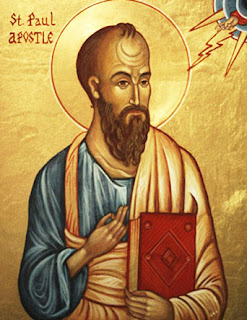 From Paul, an apostle (not from men, nor by human agency, but by Jesus Christ and God the Father who raised him from the dead) and all the brothers with me, to the churches of Galatia.

It is a sad commentary on church history that most books on Galatians treat this opening of Paul's letter as being about him emphasising his own status and authority.

In the days before Skype, emails, or even telephones a ruler often couldn’t speak directly to someone far away, so he’d send a trusted apostolos as his envoy or messenger to carry his words to them.  But an apostle was not just any old messenger, he was someone especially tasked and trusted to relay the message precisely and faithfully, in the name of his master, without distortion or elaboration. It was an honourable role, but also a servant role.

So Paul begins his letter not by emphasising his own authority, but by de-emphasising it. As he goes on to say, his own history of persecuting Jesus' followers leaves him no right to expect any status on his own account. But he does have a message to give.

It's a message he has passed on faithfully once, and he is duty-bound to pass it on again in the face of confusion, distortion and misunderstanding. He cannot vary it nor can he reverse it, because he is an apostle - the message is not his but comes from Jesus.

But now they were becoming confused. It looks as though the same people who had been stirring up trouble in Antioch (see this post from early in the year) had carried on to Galatia, spreading their different message to the new non-Jewish converts that, having been accepted into God’s people, through Jesus, they now needed to follow Jewish ways: being circumcised and obeying Jewish Law.

So Paul is writing to repeat his message, the one he received personally from Jesus. He will use this letter to expand on its meaning and emphasise its importance, but the message remains the same. Jesus has changed everything, everyone is welcomed into his community, and his Spirit is the true mark of his people. Jesus has given himself to set us free, and that is sufficient.