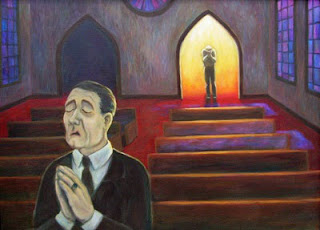 To some who were confident of their own righteousness and looked down on everyone else, Jesus told this parable: “Two men went up to the temple to pray, one a Pharisee and the other a tax collector. The Pharisee stood by himself and prayed: ‘God, I thank you that I am not like other people—robbers, evildoers, adulterers—or even like this tax collector. I fast twice a week and give a tenth of all I get.’

“But the tax collector stood at a distance. He would not even look up to heaven, but beat his breast and said, ‘God, have mercy on me, a sinner.’

Paul, or Saul of Tarsus as he had previously been known, had been a ‘zealous Jew’ of the party of the Pharisees, we are told here in Galatians and elsewhere. To us maybe that sounds harmless: a religious sort of chap, maybe wearing odd clothes, or spending his days in dusty libraries discussing obscure points of theology, perhaps? Nothing could be further from the truth!

The Pharisees’ roots lay in the days of the Maccabees with their violent rebellion against the occupying Seleucids and against the Hellenised Jews who worked with them. Later the fruit of such zeal was seen in the murderous results of zealous Judaism in Jerusalem during the later stages of the First Jewish-Roman War in 69-70 AD (as told by Josephus) when Jewish factions slaughtered one another as the Roman armies waited outside. This is the background to Paul’s mission against the followers of Jesus.

Then Jesus came to meet Paul on the road to Damascus, and gave him a message. Think about that; if God chose Paul of all people to carry his message – that zealous persecutor of Jesus’ followers – how much more can he choose you, even me, to do wonderful and unexpected things?

That's the point of Paul telling his own story early in his letter to the Galatian churches: although by background he is a Pharisee, he now knows that he stands before God as worse than the tax collector in Jesus' story.

It’s the queen’s official 90th birthday this weekend. She’s a little over ninety years old and has been on the throne, and therefore head of the Church of England, for more than 64 years.

Aristocracy is about as ‘us & them’ as you can get, and royalty the peak of that, so Elizabeth Windsor, like Saul of Tarsus before her, might seem an unlikely messenger of Jesus, in whom “all are one”. Nevertheless, the queen’s graciousness and stability in both her royal capacity and as head of the CofE, leave her well-regarded in the country as a whole, and her Christmas messages often have a Christian theme.

This is the first Sunday for our new Transition Minister, Penny Cuthbert, here in Caversham; it seems a fair bet she’ll be talking about Grace at St John’s today, and that she'll have messages for other churches in the parish as she settles in.

Whether it’s Paul, or the queen, or Penny, or you, or I, or even that tax collector in the Gospel reading, we all have a history, a story to tell. And within that story there is a witness to God at work - maybe even to Jesus turning things upside down - and a message from God for us to share. The challenge for us is to notice what God has been doing and to share our experience of God in our lives with those around us, humbly and compassionately.