The Sower and The Seed II 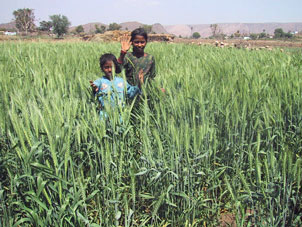 'Israel' in the New Testament almost always refers to the people (the descendants of Israel, aka Jacob Ben-Isaac) not to a country. This is hardly surprising, as no country called Israel had existed for more than seven centuries, and even back then it had specifically excluded Jews, who inhabitanted the separate kingdom of Judah. Jews, however, were always part of the people Israel.

The exception to the above is in the second chapter of Matthew's gospel, where he talks about the return of Jesus' family from exile in Egypt to 'the land of Israel' - as a clear reference to the old Exodus journey.

When Jesus told his parable about the sower and the seed, many in the crowd would have been familiar with the writing of the prophet Isaiah. Many years before, Isaiah had written a poem, known as 'The Song of the Vineyard', which talked about Israel as a vineyard which would only bear bad fruit. Therefore God had abandoned it and given it over to being trampled, filled with weeds, and dried out.

Why, in Jesus' parable, was the land so neglected? Because when God looked to Israel in that time for justice and righteousness, nothing had changed: He found only bloodshed and cries of distress.

Yet Jesus still came to scatter the seed. Much of it was wasted, perhaps - this was not good land. But there were still places, here and there, maybe where it was least expected, in which seed did manage to take root, to grow and to bear good fruit. Israel's leaders may have rejected Jesus and handed him over to be crucified, but there was still a remnant of Israel to remain faithful and to receive God's Spirit: new life for them and for the world.

And so it seems to continue: the seed is scattered and people respond in different ways: some with indifference, some with enthusiasm; some bear good fruit, others very bad - as a knowledge of church history makes only too clear.

But I'm not sure the story ends there. I think (after discussing the passage with others) that there is another, higher note in the chord - one which is maybe more directly relevant to our lives today.

Jesus' death and resurrection changes everything, and that change is enabled by God's Spirit poured into people's hearts. It seems to me that the farmer is at work again: clearing stones and removing weeds. God's Spirit waters and cleanses lives, allowing fruit to grow in the most unlikely places.

The truth is that it is often those who are most aware of their need for help who will bear the most fruit, because they will let the Spirit do the work. Jesus changes everything: it is the flawed and the insecure who are the most important in His Kingdom. If that is you, then be glad. Watch out for, and celebrate, God at work within you. Be open with those around you, about your flaws and about your growth, that they may share in your encouragement.

God is good and God is love ... sometimes we forget.
Posted by BlackPhi at 02:56