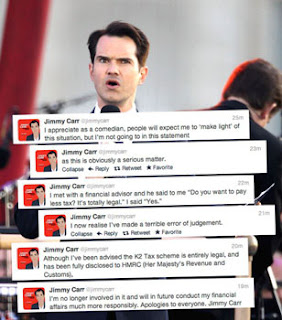 I wonder if one of the great divides in modern society is between those who believe that paying taxes is an unreasonable burden to be avoided by any means possible, and those for whom taxes are their contribution to the society in which they live and work.

For example, according to Stephen Pollard, writing in The Express:


Let me be blunt: only a fool would pay more tax than he has to. The Government sets the rules and the rest of us follow them. Who would choose to hand over more money than the law requires?

and John Robins (in response to someone asking ""why is everyone acting as though @JimmyCarr has killed a baby?!"):


Because babies die in underfunded hospitals

Jimmy Carr's initial response to his outing as part of the K2 tax avoidance scheme is reported by the Mirror to have been very much in the 'only a fool' tradition:


I pay what I have to and not a penny more.

By the following day Carr had changed his approach, as reported in Metro:


'I met with a financial adviser and he said to me "Do you want to pay less tax? It's totally legal." I said "Yes."
'I now realise I've made a terrible error of judgement.'

Hopefully this was a change of heart arising from spending time thinking things through, although cynicism suggests that he may simply have reflected that a comedian with no credibility is unlikely to have any use for tax avoidance schemes, legal, ethical, or otherwise.

But what about the financial advisor? Presumably s/he thought they were just doing their job by coming up with wildly unethical ways for their clients to avoid paying their taxes to the government - I guess it 'justifies' the money being paid instead to the advisor. So maybe the advisor feels duty bound to suggest such schemes and the client, knowing little about financial matters - that's why they are paying a financial advisor after all -  just thinks "saving a bit of cash, fair enough" and agrees.

As Cliff D'Arcy puts it in the Daily Mail:


Indeed, the tax system is seen as a 'game of cat and mouse' by tax advisers, who get paid very well to find new loopholes as and when HMRC closes old ones.

But D'Arcy puts this 'game' into context for the rest of us:


It's reckoned that aggressive tax-avoidance plans such as K2 could be costing the UK as much as £4.5billion a year in lost taxes. That's enough to reduce the basic rate of income tax from 20 per cent to 18.5 per cent overnight.

Many years ago, when I earned rather more money than I do now, I had a financial advisor used to visit. Once we'd got past the initial gimmicks she was well-informed and useful: with good advice about how to balance long and short-term savings, for example, and making sure credit cards are paid off in full each month. Nothing terribly special, perhaps, but I learnt a lot which came in handy later when my income dropped fairly drastically. So maybe financial advisors come in two sorts also: those who see their job as being to help their clients ethically and with integrity, and those who just want to get clients and make money.

The difference, incidentally, between ways of reducing tax paid that I consider ethical and those which I do not lies in their contribution to wider society. For example, in the UK an ISA is a way of encouraging individuals to save by reducing the tax paid on interest earned in qualifying savings schemes. They were deliberately set up by the UK government because such savings are seen as being good for the nation as a whole, and they are simple and straightforward in operation. K2, and other avoidance schemes, are none of those.

I started by considering two sides of a great divide on paying tax: those who want to pay their way, and those who want to avoid responsibility. Actually I think there is a third group, probably much larger than either: those who will follow the crowd. Nobody really likes paying tax, but tax is a vital foundation of a functioning society. So either people think it through, coming down on one side or the other of my divide, or they just drift. If Jimmy Carr's 'terrible error of judgement' has the effect of encouraging people to drift towards paying their way in society that would be a useful start.
Posted by BlackPhi at 11:33