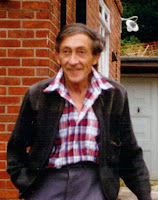 I think last month has to go down as being very definitely not my favourite month.

It began (and continued) with my wife hobbling about on crutches, off work and needing to be taken everywhere by car - including extra trips to physios, doctors, scans, etc. Lousy for her, challenging for my CFS/ME. Thankfully she's now working part time - mornings - trundling around on her crutches, although that gets very painful for her after a while.

I gather there are increasing numbers of people being injured by out-of-control dogs in our local parks. It is the old problem of an incompetent and inconsiderate minority messing things up for everyone else - if they cannot control their dog they should keep it on a lead, it's that simple surely.

Having had CFS/ME more-or-less under control for many years now, I have occasionally wondered how far the symptoms nowadays are more down to middle age and physical unfitness. Mid-May I was hit by a virus when my system was already on the edge, and simply crashed. There is a distinctive combination of feverishness, migraine, nausea, hunger and utter exhaustion - suddenly it all came rushing back to me. Now I'm just fragile and sleeping like a toddler (or old, old man) every afternoon.

A fortnight ago my father-in-law (pictured) died; his funeral was last week. He'd been very poorly since last summer, and not at all well for several years before that, so it wasn't really a surprise ... but still a shock, if you see what I mean. Similarly, it was very sad that he's gone ... but also not sad, because he really was not well and emphysema isn't something you recover from. It's amusing to think of him up with Simon Peter: discussing boats, supping fine ale, and setting the world to rights. Then settling down for a good long rest.

The sting in the tail is that it would have been my Dad's birthday at the beginning of the month; he too died of emphysema a few years back. Not good.

Any silver lining to this May? Well, there was the Delain concert I have already posted about, and there was my son home for the final week. We expected him back for his Grandad's funeral, but he suddenly turned up several days earlier than I'd expected; so that was a pleasant surprise.

That's about it though, in truth. Oh well, here's looking forward to June with optimism and hope. We never quite know what treats might be just around the corner.
Posted by BlackPhi at 14:43