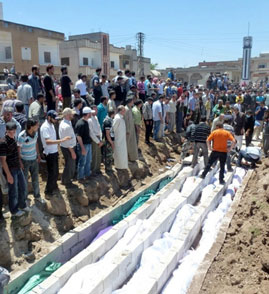 The 'Arab Spring' hit Syria in March last year when security forces arrested and tortured a group of teenagers - for painting revolutionary slogans on their school's walls. They opened fire on the resulting protest march, killing four, and again at a funeral for the victims, killing at least one more. As a display of brutal incompetence by the Syrian regime it is hard to see how this could have been beaten.

Before that commentators were generally agreed that Syria was unlikely to be seriously affected by the changes affecting the more southerly autocratic regimes in the region. Although far from democratic, President Bashar Al-Assad was seen as reasonably popular within Syria, had already brought in some mild reform, and represented stability and security in a large country with a varied population. Opposition and protest groups were fragmented and localised; Syrians saw the possibility of breakdown, even civil war, and were thought to be horrified at the risk. The horrible example of neighbouring Iraq made it all too clear what could happen.

The trouble is that all those arguments still stand, except that Assad isn't doing so well at imposing security himself. Syria is currently headed toward anarchy and civil war, and Western intervention is just making chaos more likely. The Independent reports that the death toll to date is thought to be around 10,000, whilst a further 1.5 million are estimated to need 'urgent humanitarian assistance'.

Meanwhile the spotlight of the Western media is on every minor uprising, encouraging revolt to happen and criticising every attempt to prevent rebellion from growing. The publicising of the violence leads to pressure from consumers of the media to 'do something', without any idea what that 'something' is. So now Western leaders are again talking about 'regime change'.

We've been here before, in Iraq. Years of sanctions which hit the poorest, and limited oil-sale schemes which benefited the corrupt, until finally the West got the invasion it wanted and Iraqis got anarchy. At least in Iraq the regime had been genuinely evil: something like a million people had suffered and died under Saddam Hussein, so the half-million plus who died under US rule could, arguably, be said to be vaguely proportionate.

Under Bashar Al-Assad, the only report of significant regime killings I can find was at the 2004 Al-Qamishli riots, where clashes between Arabs and Kurds, combined with police brutality, led to some 30 deaths (some reports set the figure as high as a hundred). Since the Western media focussed on Syria the death toll is well up in the thousands; if full-scale civil war or other form of anarchy breaks out then that will be in the hundreds of thousands, maybe even worse. Brutal suppression of rebellion can be bloody; sometimes the alternative can be worse.

It is notable that the diplomatic games around Syria refuse to involve Iran: if there was a serious interest in peace then Iran and Russia are the two states with a realistic chance of making a difference, but peace and justice are really not the name of the game here. If they were then the focus would be much more on the Arab Gulf states, particularly Bahrain, where a tiny but immensely wealthy regime oppresses the majority of citizens with little more than token complaints from its Western 'friends'.

I'm not saying that Assad is a good leader, nor that Syria is anything other than autocratic and corrupt. But what's happening there now isn't part of an 'Arab Spring' movement toward democracy. It's small localised revolts which are gradually growing towards outright civil war; and civil war is very bad indeed for the people of a country.

So, next time you see a news report of deaths in Syria, before you indulge in self-righteous indignation and claim 'something must be done' ... just take a moment to think that it is likely that your 'something' will just make matters worse. By responding like that you may well be a part of the problem.
Posted by BlackPhi at 16:41