The Sower And The Seed I 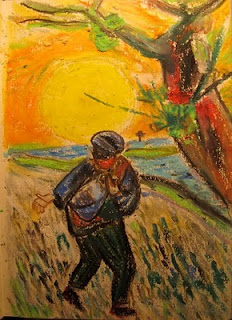 The vast majority of the Bible was written to be listened to and discussed in groups, not read alone. There is a breadth of knowledge, wisdom and Spiritual insight in a group which no one person can have on their own. So it is really strange that the standard pattern for teaching and preaching in modern churches is one person spending hours alone in their study then standing up to give a lecture to a congregated, but silent, audience. Maybe that's why so much preaching today fails to engage, with either daily life or even with the Scriptures.

Jesus' parable of the sower and the seed comes up fairly often in churches, as it occurs in all three synoptic Gospels and comes with an 'explanation' from Jesus. It's less well known outside churches, probably because its usual interpretation is not really very interesting or relevant. Jesus does seem inclined to give 'explanations' which raise more questions then they answer, and this parable rather illustrates this.


"Listen! A farmer went out to sow his seed. As he was scattering the seed, some fell along the path, and the birds came and ate it up. Some fell on rocky places, where it did not have much soil. It sprang up quickly, because the soil was shallow. But when the sun came up, the plants were scorched, and they withered because they had no root. Other seed fell among thorns, which grew up and choked the plants, so that they did not bear grain. Still other seed fell on good soil. It came up, grew and produced a crop, some multiplying thirty, some sixty, some a hundred times."

Then Jesus added "Whoever has ears to hear, let them hear" - in a Jewish context 'hearing' is partnered with 'responding', as in the Shema, "Hear, O Israel, ...". So Jesus is presenting this parable as something which should be producing a response in its hearers.

Tom Wright, in his Mark for Everyone study guide, likens Jesus' parables to chords and speaks of choir auditions where he had to pick out and sing individual notes from a chord. A parable can have several separate layers of understanding, from the basic story up through different interpretations until we reach the one which corresponds to our part in the musical score of God's story in our communities.

In medieval times interpreters sometimes went to extreme and, to modern ears, ludicrous lengths to forcibly allegorise their own opinions and prejudices onto parables, so understanding does need to be done with care, humility, and a rootedness in the text. Every harmony needs to relate back to the root, and to the other notes in the chord.

So the basic text, the bass line so to speak, is an odd story of an apparently careless farmer who doesn't bother weeding and destoning his field, and just scatters seed about without visible concern where it lands.

The two quoted sections above are from Mark's gospel, chapter 4; retellings in Matthew 13 and Luke 8 are almost identical, except that Luke likens the seed to "the word of God", whilst Matthew refers to "the message of the kingdom". All three versions place the parable in the context of large crowds of people coming to hear Jesus speak.

So the next note in the chord looks to refer to the thousands of people who came out to listen to Jesus. Some simply saw the latest spectacle and would move on; others might respond initially, but only a minority would stay with Jesus all the way through. But those few would be enough for God to start a movement of people through whom He would change the world.

Which still begs several questions about a farmer who does nothing to clear the weeds and remove the stones, not to mention being so careless about where the seed is scattered. And what does it have to do with us, here, today?