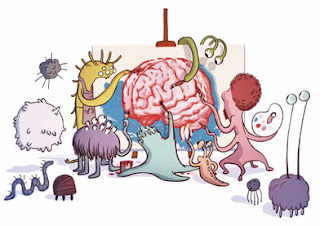 Once we used to think that microbes were just 'germs', harmful and to be wiped out wherever possible. Now we are beginning to realise just how important they are.

In our guts we have an immense and complex microbial ecosystem, which affects our health in many ways. Whenever we take oral antibiotics that is really badly messed up. It would be a lot better if we kept antibiotics as a last resort and instead focussed on helping our gut microflora develop in ways which are healthy for them and for us. Respecting the life which is inside us and working with it rather than against it. 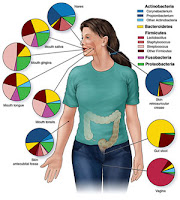 Researchers are also just beginning to home in onto a similar complexity of microbial life on our skins and in our mouths. It would be good if some serious studies were done on the consequences of wiping out parts of these communities with antiseptic soaps and mouthwashes - they may be doing more harm than good. Our microbiome is a lot more complex than we had previously realised; it should be treated with respect.

It is fairly well known now that insecticides are problematic. They kill insect predators as well as the main insect 'pests' - and the latter are much quicker to develop resistance. They also tend to accumulate up the food chain. Adjusting conditions to favour a more balanced and stable ecosystem is, in the long run, far more effective.

When it comes to effective use of the earth's land surface to grow food for the human population, studies have shown that some areas are best suited to growing plants for food and other are best suited to rearing animals. To feed our growing population fairly and effectively requires both plant foodstuffs and meat.

The proportion of the ideal diet which is meat should be significantly lower than the current average in the developed world, and significantly higher than parts of the developing world. Intensive rearing and general 'factory farming' are not efficient users of resources, so more sustainable patterns are required, for both plants and animals. Again we should be aiming to work with complex ecosystems rather than against them, recognising that monocultures and mass poisoning are both ineffective and inefficient.

One of the features of a successful ecosystem is that life and death are both a part of the web. I don't want to go all Disney 'circle of life' - reality is far more complex with its webs and time dependencies - but respecting life includes respecting the place of death. Every living thing dies (more or less), it is a part of life. Killing unnecessarily is disrespectful of life, but so is pretending death won't happen.

If humanity is to survive on this planet in the longer term we need to find ways to integrate ourselves into the wider ecosystem. In part that means stabilising our population; in part it means using sustainable food production methods, utilising both plants and animals; but mostly it means respecting life in all its diversity and complexity and working with it rather than against it. We are a part of something far larger than ourselves.

To apply this to the questions raised in my 'Cecil' post: as a generalisation a diverse ecosystem is healthier and more resilient than a narrow one. New species form and old ones die out, but we should do what we can to maintain a balance, and should certainly avoid putting unnecessary pressure on species and their environments.

A final 'Cecil' question was about 'speciesism' - how far should we treat homo sapiens' life as being uniquely valuable?

From a Chrstian point of view, we believe that men and women are all made in God's image, and should be respected as such. But we also believe that we are called by God to be responsible stewards looking after this world, not just exploiting it for our own ends. All life came from God and should be treated with care and respect.

There is a bit of a question mark over what particular aspect of people is 'in God's image'. It is unlikely to be physical - as God is spirit - so it is more likely something to do with creativity and free will and 'sentience' - the ability to feel and experience subjectively. Some animals show signs of doing these things too, to a greater or lesser extent.

Does that mean that some are closer to God's image than others, with mankind at the peak? Could that be a basis for valuing a dolphin's life, say, over a tuna's?

I'm not really sure how well that works, but I do believe that a respect for life in all its aspects is a fundamental of living in the best way we can. 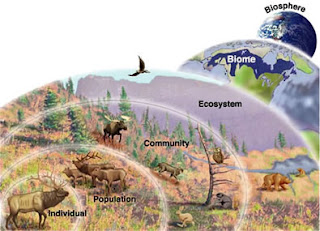