Cecil The Lion: Drawing A Line? 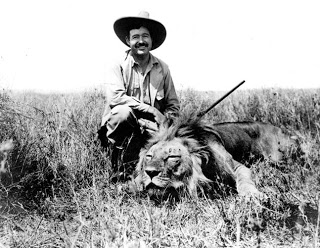 In the early thirties Ernest Hemingway went hunting in East Africa and it helped cement his reputation as a "man's man". A few weeks ago Minnesota dentist Walter Palmer went hunting in Zimbabwe and was widely seen as an inadequate person with more money than humanity. Times change.

Shortly after the fuss started about Cecil the lion I noticed vegans making comments on the hypocrisy of people complaining about the killing of Cecil yet still eating meat. We should respect all living things, we were told, not just the charismatic ones.

It seems a fair point, until you start to think about the breadth of the term 'living things' - from smallpox to blue whales, and from caterpillars to human beings. When we take antibiotics we are killing millions of tiny creatures; even an antiseptic wipe wreaks mass slaughter. Insecticides on crops kill insects - living creatures - and pest controllers kill rats to protect the health of families. Actually plants are living things as well, but that's an old argument.

Where do you draw the line?

As I understand it vegans don't eat fish or crustaceans, neither do they eat eggs or milk, nor birds or mammals. Insects and insect products (such as honey) are apparently disputed. As far as I know veganism does not include avoidance of crops on which pesticides have been used. It's drawing a line quite low, but nowhere near low enough to include all living things, not even all animals.

At the other end of the scale there are those who are perfectly happy with killing animals (or causing animals to be killed) but consider killing humans as murder and morally wrong. Again a line is drawn.

As an aside I note that Walter Palmer, as a citizen of the USA, is from the nation with the highest murder rate in the developed world - triple that of neighbouring Canada and nearly five times that of the United Kingdom. Maybe a carelessness about the lives of animals bleeds over into carelessness over the lives of people.

Then there are many who would draw lines somewhere in between. Maybe based on charisma or cuteness, maybe on perceived intelligence or assumed sentience and awareness; maybe based on conservation or ecological criteria. So eating tuna might be considered ethical so long as no dolphins are harmed in catching them, for example. Or beef might be fine as people breed vast numbers of cows, whilst lions and many whales are rare and declining in number.

I wonder about this sort of line drawing, in part because I keep reading about Jesus refusing to do so himself. Jesus, it seems to me, had a habit of approaching such questions sideways on, looking at issues in terms of underlying attitudes rather than black and white dividing lines.

Is there another of looking at the killing of animals? Can a respect for life inform our attitude to all living things, not just higher animals? And how important is 'species-ism' - the idea that killing other homo sapiens is far more abhorrent than killing other species?

This post is long enough, I reckon, so I'll end here and look at these issues in another post.