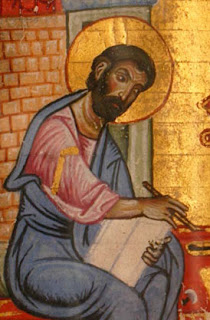 Mark became Peter’s interpreter and wrote accurately all that he remembered, not, indeed, in order, of the things said and done by the Lord.

One problem with blogs is that their archives tend to be in reverse order: most recent first. For many purposes that is helpful, but for posts supporting a sermon series on Mark's Gospel it seems less so.

Actually Mark himself is said to have written his Gospel thematically, rather than in chronological order (which is why it is so daft when people try to create a timeline of Jesus' three-year ministry from the four Gospels). So this list aims simply to reflect the order sections are in that Gospel, trying to highlight themes in the same sequence as Mark.

I've included a post or three written before the sermon series started, where they covered relevant ground.


The introduction to the sermon series.

The opening: a title and a one-line summary.

Who says religion and politics don't mix? Certainly not Mark.

What does Jesus say the good news ('Gospel') is? More to the point what do his actions show about that good news?

Mark tells a story which is pacey, emotive, and where Jesus deliberately says and does things which demand a response. Some people were amazed, others horrified, but Jesus couldn't be ignored.

Jesus the rabbi, the teacher, the good man ... but "Who is this, that even the wind and the sea obey him?"

The lack of punctuation in the title is deliberate. A healing sandwich, but who is actually doing the healing?

A follow-on to post 5 really. This series challenges us to read and hear Mark's Gospel with fresh eyes and ears, and to respond anew to the Jesus we meet.

The half-way point. The penny drops for Peter then is lost again. A change of direction and a mountain-top experience.

What does it look like to turn to God through Jesus and step out in faith?

An upside-down Kingdom and a Church called to be Jesus' hands and feet and heart and voice in its local communities.

The trap closes and the 'victim' is caught. Jesus is close to defeat and death ... in God's upside-down kingdom he knows that is the road that leads to life.

Mark's Gospel doesn't really finish ... more precisely, the finish in our Bibles was clearly added much later. Mark leaves us a cliff-hanger: will they or won't they? It's an ongoing story and the final open-ended question still hangs there today.

Why did Mark write this Gospel account; why had Mark's companions in Rome (and beyond) suffered so much; and why do Jesus' followers still suffer today?

PS: I know that I have left the previous two posts half completed, waiting for a part two (actually there should be a part three to the 'Trinity' posts also - about mission and the Trinity - although I need to do more thinking about that). Hopefully I will do those soon, but I wanted to get this Mark resequence done quickly, while it might still be relevant.