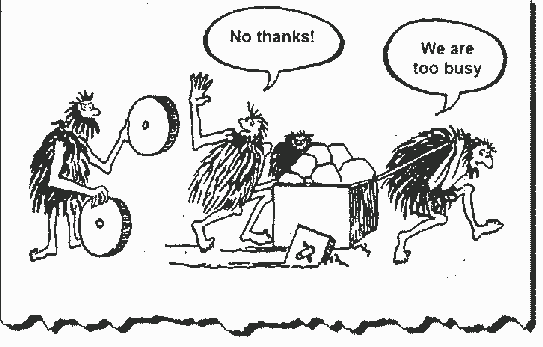 Several times over the years I have asked people (churchgoers and non-churchgoers) what they thought church services are about, who they are for, and how they can be made better. A couple of recent answers (from churchgoers) got me thinking:


"Our Sunday service should be for everyone in the local community; but really it's for people like us."

"We realise we have to change, but some of us think we are already changing, and maybe changing too quickly."

The second of these, from a lovely older lady, is a genuine cry from the heart which illustrates a real issue. Older people are often resistant to change (with all sorts of exceptions, of course), and churchgoers are often looking for a sense of changelessness. The trouble is that, with ageing congregations and declining numbers (except in immigrant-majority churches), the choice is change or slow death.

It's not as though Jesus promises a quiet life, and the Holy Spirit is described as a wind that 'blows where it will'; not to mention all the people in the Bible who find themselves sent out to do God's work away from their homes and their comfort zones.

So I believe that on the one hand change is desperately needed, on the other it needs to be managed and paced carefully, bringing along as many as possible of those who would not choose it. Change for its own sake is pointless, though, as is change for the sake of being like the surrounding culture.

Somehow the direction of God's Spirit must be discerned and moves made to head in that direction. This gets tricky with an ageing congregation already bogged down trying to keep a huge range of activities going from the days when church was bigger and more central. Not to mention an accumulation of previous years' initiatives which are maybe doing good things but not bringing noticeable growth.

I remember when I first started getting involved in churches we used to scorn measuring growth in numbers, "bums on pews" as we put it. "Seek ye first the Kingdom of God" was our attitude and let God worry about the numbers. The trouble is that churches didn't do a good job of opening up God's Kingdom either, so we can hardly complain now God is allowing the numbers to slip.

Maybe once we recognise our minority status we'll be more positive about welcoming and working with other minorities. One can always hope.

We probably need a new paradigm, a new mindset and active approach, to cope with our uncertain future. I'm blowed if I know what it is though! Any thoughts?