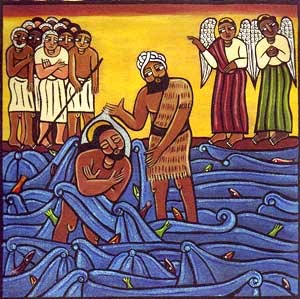 Early in Mark's Gospel he tells us that John the Baptist was "preaching a baptism of repentance for the forgiveness of sins", and saying that, whilst John was baptising with water, the one coming after (Jesus) would baptise with the Holy Spirit.

Similarly, in Acts, we hear the story of Paul going to Ephesus and finding some disciples who had been baptised with "John's baptism". Paul tells them that John's baptism was a "baptism of repentance" and baptises them again "in the name of the Lord Jesus", then "the Holy Spirit came on them, and they spoke in tongues and prophesied".

This looks very much like two baptisms: one in water for repentance and a second in the Holy Spirit. Although in the case of Cornelius they were the other way around: Cornelius and his fellows received the Holy Spirit then they were baptised in water "in the name of Jesus Christ".

It all seems a bit messy to me, and gives lots of room for different groups to argue about their differing practices, trying to make the passages of Scripture fit what they prefer to do.

As ever, words and their changing meanings over two thousand years are part of the problem.

'Repentance' gets confused, especially by religious people, with remorse and penitence: it becomes a very negative, "woe is me for I am a wicked sinner" kind of idea. That is not what the word means in the Bible. The original Greek word metanoia simply means change of heart, change of attitude or change of (life) direction. Almost certainly the underlying Hebrew word (Jesus' and John's native language) would have been Teshuva, which means turning back to God, implying turning away from darkness and wickedness. Both the Greek and Hebrew words refer to a positive concept: a positive change of direction. The process might involve being regretful for what went before, but that is not the point. The point is to turn to God, to direct one's life toward a new, better way.

This confusion about repentance has led to arguments about who should be baptised. If repentance is about being remorseful and penitent then it must require a certain level of mental knowledge and understanding; therefore some church traditions don't baptise young children - although they commonly will baptise people with dementia and other forms of severe brain damage, which is a little inconsistent. However, if repentance is simply about turning to God, then you don't need an IQ test to do that - in John's Gospel Jesus talks about an instinctive response to his light, whether we turn toward it or away.

Also, back in New Testament times people were much less individualistic then today's Westerners and more family and community oriented. So you get occasions in Acts where x and their household are baptised, for example Lydia and Peter's jailer. The latter brings up another confusion of words: in the New Testament 'believing in' and 'faith' are mostly about trust rather than mental ideas - believing in a person, having faith in a person, not in the sense of believing they exist, but that you can trust your life to them. Again, you can do that without schooling and without careful cogitation.

Then we get 'speaking in tongues' and 'prophesying'. Originally speaking in tongues simply meant speaking in a foreign language, see the story of the first Christian Pentecost in Acts 2. This illustrates a reversal of the division created by the Tower of Babel story. How this got turned into 'speaking gobbledegook' is a bit of a mystery. Similarly prophesying was not really about predicting the future but about speaking out God's message for today, which might happen to include future consequences.

The point is that when someone is 'baptised in the Spirit' they are filled with God's overwhelming presence and power, maybe with the result that their speech reflects that experience and that presence. This might involve praising God in other languages, it might involve speaking out in God's name, it might even lead to just speaking incoherently. Or the experience may simply lead to silent wonder and adoration.

Pulling this all together: I don't myself see the Biblical witness as being about two separate baptisms, but as one single life reorientation - possibly spread over a period of time. Repentance involves turning to God, receiving the Holy Spirit empowers us to step out in that new direction, and to do so in the company of others.

Walking in Jesus' way is a lifelong journey. In my experience this involves many wanderings and false turns, also a great deal of exhaustion and attrition. Re-turning towards God is a regular need; but equally important is the direction, energy, and sheer staying-power that comes from his Holy Spirit, plus the mutual support and encouragement that come from walking together with others, bonded by that same Spirit.

One baptism in the name of God, who is Father, Son and Holy Spirit.
Posted by BlackPhi at 14:00