I Am Not Charlie Hedbo, But 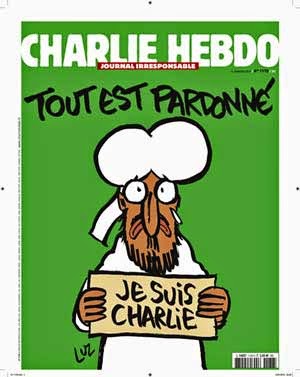 ... I do think it is right to show the cover they published immediately after so many of their staff were callously murdered.

I do also call 'hypocrite' on all those who claim 'Je suis Charlie', but don't publish any of their cartoons, either for fear of causing offence or just through fear. Causing offence is what Charlie Hebdo did, if you don't want to do so - a perfectly reasonable stance to take - then don't claim to be them, even in solidarity.

Personally I don't want to do the "Je suis Charlie" bit, even in solidarity, because I am not and because I don't believe in being crude and offensive for the sake of it, which appears to have been the standard Charlie Hebdo approach.

Buzzfeed have a dozen of their covers here, if you wish to see something of what I mean. But don't say you weren't warned.

But I do believe in freedom of speech (along with responsibility for what is said) and I do believe in sanctity of life. To kill someone because you find something they have published offensive is simply wrong. To do so in the name of God/Allah/Jahweh is blasphemous, in my view ... but I leave it to God, Allah, and/or Jahweh to defend themselves.

The trouble with not doing something because it might cause offence is that it would be never-ending. People get offended very easily. I think the answer is exactly the same as for those 'Christians' who object to gay marriage: if you don't agree with it then don't do it. But don't try to impose your dislikes onto everyone else.

If you don't want to draw a picture of Mohammed then don't draw one. It's best, perhaps, to not buy magazines like Charlie Hebdo either. But certainly don't think your hurt feelings in any way justify mass murder. They don't, and you can expect judgement from your deity of choice for any suggestion that they do.

There is an immaturity and nastiness, I think, in those who seek to offend 'just because they can'. I agree with Will Self who, last week, reckoned that satire should be about lampooning the powerful, not about bullying the already persecuted.

There is serious hypocrisy in those states and leaders who bleat about freedom of speech whilst restricting that freedom in as many ways as they can (it is against the law in France to deny that the Holocaust happened, for example).

But none of that alters the fact that it is important to stand up against those who would impose their own views and prejudices by murder and by intimidation.

With apologies to any French speakers offended by my linguistic incompetence ;)
Posted by BlackPhi at 14:57