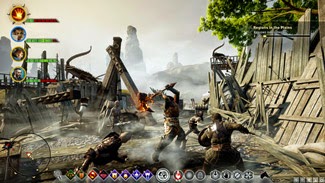 My first impression of DAI was poor, but as I have played on it has got better and better.

A bit of history before I attempt to articulate why. Inquisition has its roots in two venerable approaches to computer RPG games, both of which have deep literary roots.

The first approach is the mixed party of adventurers on a quest, typically to save the world, dealing with various side-quests along the way. Think Lord of the Rings. The party typically contains a tough fighter/knight sort of person, a sneaky rogue who can open locks and attack people from behind, a wimpy intellectual magic user, and a religious healer who often also doubles as a second fighter. This mix goes back to the days of Dungeons and Dragons, a tabletop game played over many a weekend by people (including myself) back in the seventies and eighties. The great thing about this approach, particular with the 'group of friends around a table' background, is that interactions between party members became an important part of the tradition. Also the D&D background insists on an openness in gameplay - allowing many different playing styles and approaches to solving the problems encountered along the way. This provides a lot of replayability for this type of game, as you can play in several different ways, and make different decisions en-route which might significantly change the way the story unfolds.

Bioware developed the classic games in this tradition: Baldur's Gate and Neverwinter Nights. They moved on to other things and Neverwinter Nights II was developed by Obsidian, taking the gaming perspective from the old isometric top-down viewpoint to a more immersive 'over the shoulder' camera. I thought this was a great game and storyline, but badly marred by the game engine, which couldn't cope with the challenges of the new approach. Then there was a gap before Bioware returned to the genre with Dragon Age: Origins, which solved the camera problems (near enough) and provided a huge amount of replayability by having half-a-dozen different starting points - depending on your choice of main character - and by providing feedback at the end about the consequences of choices made along the way. To add the icing on the cake they also provided a modding tool - allowing people to create addons and extras to go with the game. The effect of this is to extend the lifetime significantly, as graphics can be improved and extra stories and quest series added in.

The second approach is the lone hero, an all-rounder who learns the skills s/he needs along the way. The greatest exponents of this approach to cRPGs are The Elder Scrolls series by Bethesda, whose most recent example is Skyrim. This approach forgoes character interactions, replacing them with a richer, more diverse set of questlines, and a more immersive approach to fighting. As well as the main 'saving the world' quest, the game world is more of a 'sandbox' filled with quests large and small. In a Bethesda game you can replay ignoring the main quest more or less entirely, instead focussing on becoming head of the mages guild, for example, or helping one side win the civil war which is the background to the gameworld, and so on. The more D&D-derived games retain a bit of a turn-at-a-time approach to combat, where you fight by clicking on a target and letting the game engine decide if and when you hit it. Skyrim and its predecessors work more on the basis that you swing a weapon and whatever it hits takes damage; a problem if you are not very accurate and hit a town guard, say. Bethesda's games always have a wow-factor in the graphics of their environments; being also moddable means that this can be kept up to date as time, and graphics technology, moves on.

One of Bioware's stated intentions with Dragon Age Inquisition was to add a more Skyrim-like vibe to the game, compared to previous games in the series, with a more open-world and immersive feel. I had been playing Skyrim a lot over the weeks before I got DAI and would say they failed. Indeed I felt their attempts just made the initial impression of the game seem cumbersome and rather naff.

For example the environmental graphics (hills and grass and sky and suchlike) are really quite good compared to earlier games in the series, but rather meh compared to Skyrim. Plus the way all the hills and trees and suchlike are laid out tends to get in the way of travelling - such practicalities seem less well thought out than in Skyrim. The game interface seems to be aimed primarily at console controllers, so using a PC with mouse and keyboard is that little bit less intuitive and convenient.

Fighting is better than Dragon Age II - where it was awful - but is still a clicky mess. If you try to fight in real-time, rather than overtly turn-by-turn, then the game seems to choose for you who you are attacking from nearby enemies, irrespective of which enemy you are actually trying to target, and you just click away - occasionally interrupted because the mouse pointer happens to be over some other control, like the inventory button - until the enemy is defeated. Little control and no real tactics. You can pause the game (although the pause button is inconveniently placed) to give commands to other party members, but they just seem to do what they are told for a few seconds then revert to their AI which, as a default, just attacks the same enemy as the main character. Party tactics - one of the strengths of the adventurer party approach - fly out of the window. There seem to be ways around this but the default approach is pretty much brain-dead.

One alternative is to use an old-style isometric top-down view, which seems to be more controllable. Unfortunately this doesn't give a good view of large monsters, nor of the rifts floating in mid-air. I hope there are ways around this with practice.

The game world is divided into something like a dozen different areas (thus far). Each area has a stack of individual quests which give you 'power' and 'influence' when you complete them. Said 'power' and 'influence' then go toward progressing the main story quest. The area quests are mostly of the 'go to location X, kill the enemies there, and collect Y' format. There are a few linked quest-lines which start to emerge as the game goes on, but in the early parts of DAI the rich storylines of  Dragon Age: Origins or Skyrim are notable by their absence.

The overarching story quest is controlled from a central area where you can talk to your companions (so far companion interactions are a lot less interesting than is usual in such games, but that seems to be slowly improving as the game goes on), send agents off to carry out investigations, which typically open up new quest lines and/or new areas, or travel yourself to one of the game areas. This is the part of the game which is relatively novel (at least within this genre) and which is growing on me.

In fact the game is a whole is steadily growing on me. As I get further on the characters and story are finally beginning to develop, and I am finding ways around the various issues and inconveniences. The graphics and music are not memorable but they're not aggravating either, and the game does have that imponderable "I'll just do this one next section before I stop" degree of addictiveness. If this continues DAI could prove to definitely be a good game overall, but given its many flaws I can't see myself ever considering it a great game.
Posted by BlackPhi at 13:58