Life itself and all that goes with it - all the glory of it, all the power of it - every many splendid thing is a free gift from the God who made us.

There was a wonderful tribute on a recent Channel 4 News from trumpeter Hugh Masekela, which says more than I ever could:


"The biggest defining moment in my life was when I saw Trevor Huddleston and I was maybe nine or so. I didn't know it was Trevor Huddleston, but I saw this tall, white priest in a black cassock doff his hat to my mother who was a domestic worker.

I didn't know then that it would have affected me so much, but it was something that was really - it blew your mind that a white man would doff his hat. And subsequently I discovered, of course, that this was quite consistent with his theology that every person is of significance, of infinite value, because they are created in the image of God.

And the passion with which he opposed apartheid and any other injustice is something that I sought then to emulate."

Often it is the small unthinking things we do which best reflect Jesus to other people. 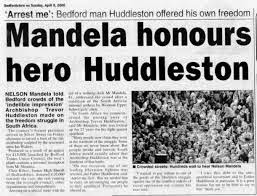