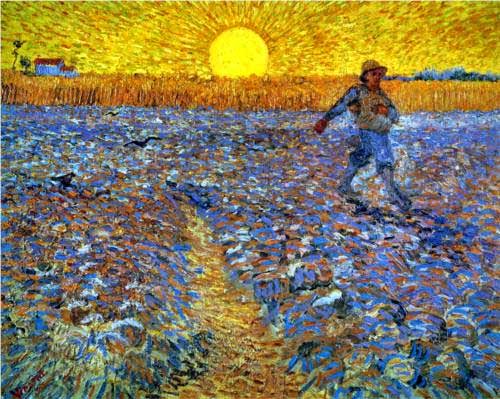 Jesus' parable of the sower and the seed is fairly well known (see below for a reminder) but it always surprises me how ready people are to assume that 1st-Century farmers really were that incompetent. Jesus' teaching was full of puns, hyperbole and even jokes, but they don't always translate well (do Bible translators have a sense of humour, I wonder? Or are they too busy being reverent?).

Why did the farmer not sow all his seed on the good ground? Corn for seed is corn that cannot be eaten or sold, so no real peasant farmer would want to waste it. If it comes to that, clearing rocks and weeds is an important part of a cereal farmer's work (yet there usually seems to be a subtext to sermons on this parable that it is somehow for us - the ground - to fix ourselves, to remove our own rocks and weeds). So this is a story of one very odd farmer.

Jesus gives an 'explanation' which, like many of his explanations, raises more questions than it answers. He basically says that the seed in this parable is a metaphor for God's word (or the word of the Kingdom), and the different grounds correspond to the varied ways in which people respond to that word.

Embedded with the parable is a question about why Jesus teaches in stories and parables, and a quote from Isaiah about people hearing but not responding:

Isaiah spent his life warning people that disaster was coming if they didn't change their ways, but the people - especially the wealthy and powerful - mostly ignored him and listened to those with a more palatable message. Jesus was teaching anybody and everybody about God's Kingdom, yet relatively few were responding and following him. Why do that? Why not focus just on those who were interested in that sort of thing?

The point, I think, of this story is that God's Kingdom is for everyone. It's not just for the religious and the intellectual, to be spread with sophisticated theological argument, it is for all who will listen, spread in deceptively simple stories. The seed is scattered everywhere, because the 'good soil' is everywhere - even between stones and hidden amongst weeds - and because those who persistently "hear but do not understand, see but do not perceive" are also everywhere - even in fields which give the impression of being good soil.

Jesus wants people to accept his message and turn to God; anybody can do it, whatever your background, whatever your culture and lifestyle. Accept God's gift as simply as a child accepts a present from a trusted friend, turn and be healed.

NOTE:  I've noticed that I have looked at this parable before, a couple of years ago, from a slightly different angle: see 'The Sower And The Seed II' - "God is good and God is love ... sometimes we forget."