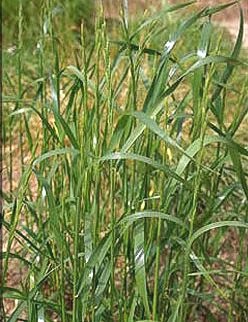 Jesus told another parable about a farmer being apparently downright perverse. In this case it was a farmer who refused to let his wheat field be weeded, in case any wheat plants were pulled up by mistake. Yet surely if you allow weeds to grow amongst wheat they will steal the nutrients and crowd the wheat out, so what on earth is he playing at?


Jesus then told them this story:
The kingdom of heaven is like what happened when a farmer scattered good seed in a field. But while everyone was sleeping, an enemy came and scattered weed seeds in the field and then left. When the plants came up and began to ripen, the farmer’s servants could see the weeds. The servants came and asked, “Sir, didn’t you scatter good seed in your field? Where did these weeds come from?”
“An enemy did this,” he replied. His servants then asked, “Do you want us to go out and pull up the weeds?”
“No!” he answered. “You might also pull up the wheat. Leave the weeds alone until harvest time. Then I’ll tell my workers to gather the weeds and tie them up and burn them. But I’ll have them store the wheat in my barn.”

'Weeds' is a remarkably unhelpful translation here; it is very likely that the Greek word zizanion refers to darnel ryegrass, Lolium temulentum. This is also known as poison ryegrass, because it is commonly infected with poisonous symbiotic fungi, Neotyphodium. There is a factsheet on darnel ryegrass on the BioNET-EAFRINET website which advises:


Lolium temulentum is a weed of wheat farmlands. Even a few grains of this plant will adversely affect crop quality. Its seeds are poisonous to people and livestock. It is very difficult to separate the seeds of L. temulentum from those of wheat and other small grain crops as they are similar in size and weight. L. temulentum can be a host to a variety of crop pests and diseases.

If prevention is no longer possible, it is best to treat the weed infestations when they are small to prevent them from establishing (early detection and rapid response). Controlling the weed before it seeds will reduce future problems.

Although they then add:


Hand weeding can control this species although this is difficult to undertake early because of the resemblance between this weed and the infested wheat crops.

So maybe the farmer isn't being quite so daft after all; he just needs to make sure he gets his timing right.

The parable isn't about grasses though, it's about people. In particular it is about telling the difference between those people who are beneficial and those who are poisonous. It is not always easy to tell the difference.

Religious groups have a nasty habit of trying to make the distinction based on their own prejudices, traditions and rules - mostly equating to "are they like us" - but God waits for people to show their true colours. Sometimes this means getting the timing right - see the Bible story of Zaccheus - sometimes it means being able to see below the surface - see the story of Simon the Pharisee - and sometimes it is about not excluding people because of superficial matters - see the story of the Ethiopian eunuch.

The promise is that at 'the end of the age' there will be a cleansing. Those who prove themselves to be poisonous will be removed, along with all causes of harm, and those who prove to be wholesome will be welcomed into God's Kingdom, to 'shine like the sun' in a renewed world where there will be no more crying and no more pain, but God himself will comfort them.