Utoeya: Is This How Muslims Feel? 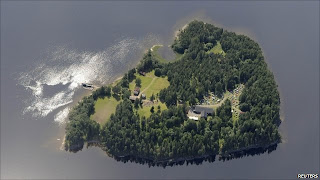 Yesterday evening, as early reports came through of a bomb attack in Oslo, followed by young people killed on Utoeya Island, my initial horror and sympathy was modulated by a 'twitch' as the suspect arrested was described as a 'Christian Fundamentalist'. No true Christian would do such a thing, I thought. On reflection, and as the official death toll moves from the horrible to the near-unthinkable, and as details of the sheer evil of the man's actions are told, I find myself wondering if that is how ordinary British Muslims feel every time there is some atrocity, somewhere in the world, put down to 'Muslim Fundamentalists'. No true Muslim would do such a thing - is that their thought?

It has long been true, of course, that different ethnic groups use a cultural Christian label in self-description: 'Christian militias' in Lebanon, 'Protestants' and 'Catholics' in N. Ireland, 'Catholic', 'Orthodox' and 'Muslim' in the Balkans, and so on. But this is less a cultural label - although the young murderer does seem to have been a far-right racist - and more of an aggressive statement: 'Christian' in the sense of 'anti-Muslim'. Much as some hard-line 'Muslim' groups seem to define themselves more in terms of anti-Western feelings than in any positive religious sense.

Far-right, neo-Nazi groups calling themselves 'Christian' seems a very odd thing from a UK perspective. Yet it is commonplace in the US, it seems, and apparently not uncommon in parts of Continental Europe. Here all major parties have Christian elements in their roots, in particular the left-leaning Labour Party. Indeed when Margaret Thatcher's right-wing Conservatives were trying to dismantle civil society in the 80's, it sometimes seemed that the only major group standing up to her was the Church of England.

I'm two-thirds of the way through Stieg Larsson's Millenium trilogy (the final book arrived yesterday); Larsson was known as something of an expert on the Scandinavian far-right, founding an anti-racist, anti-extremist publication called Expo to try to counter its influence. Since his time it seems that the Swedish far-right has calmed down a little, whilst the Norwegian far-right has grown and become more organised. To me it is very sad that a group of countries with a long-held reputation for tolerance and openness - Sweden, Norway, Denmark and the Netherlands - are instead becoming known for intolerant, racist minorities.

An appalling act, then, and a senseless waste of life. But also a reminder that labels are misleading and damaging, whether the label is 'Christian', 'Muslim', 'immigrant' or 'patriot'. We are all human beings, good, bad, and mixed-up, and we should all be treated as such: never dehumanised, never reduced to 'them'.

A final comment from Lars Helle, editor of the daily Norwegian newspaper Dagbladet, which I rather like. He said: "we must avoid being preoccupied by fear, like the US was after 11 September 2001. Rather, we must look to Spain and England and how the people of those nations recovered their freedom after the horrible terrorist acts of 2004 and 2005". Amen to that.
Posted by BlackPhi at 16:48