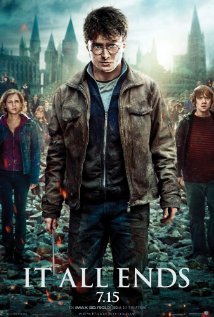 We went as a family to see Harry Potter and the Deathly Hallows Part 2 (a mouthful of a name!) at the Showcase Cinema in Winnersh yesterday. It was, like all of the HP movies, a fun watch: well-paced, visually dramatic, disjointed in plot, variously wooden and/or OTT in acting, and overall very entertaining. As with the other more recent HP movies it was also very sad in parts: as JK Rowling has said, if you want to fight evil there is going to be a cost.

I understand there are people who watch the movies without having read the books ... how on earth they manage to follow the plot I can't imagine. Maybe they don't; they just go along for the exciting ride. As the second part of what is really one story, this film is more incomprehensible than most. It's a year or two now since I last read the books (and about 9 months since I saw 'Part 1'), and I was feeling a little lost at times. Still, the film moves on so fast that it doesn't matter.

NB: There are spoilers coming.

When I was reading the books, waiting for the final instalment, one of the puzzles was how the climax was going to work out. The parallels with the Jesus story were already obvious, so Harry was very likely to end up sacrificing himself. But surely Rowling wouldn't be able to pull off a resurrection. Amazingly, in the book she not only pulls a resurrection off, but she also makes it obvious that this is the only way the battle against great evil could possibly be won. And she hammers the parallel home by having Harry meet Dumbledore at King's Cross station. I thought it was a masterful piece of writing. But not the sort of thing they could do in film, surely.

In fact the film handles this remarkably well, I think. Harry learns that the only way Voldemort can be defeated is if Harry offers up his own life, to be killed by Voldemort, in the final 'victory' of evil. So Harry goes to his death and is duly murdered. He carries Voldemort's evil with him down to King's Cross, then returns leaving it behind. About as clear an imagery of 'dying to sin and rising to new life' as one can hope for. Rather than fudging this, the film made it even more explicit, emphasising the 'man born to die' aspect in Snape's final gift of his memories.

The most poignant character for me, in both book and film, is Severus Snape, the Judas figure. The book gives more depth and detail, but still the film shows well how this unpleasant figure is redeemed by love, and given the courage to do what had to be done. As Harry Potter says to his son, many years later:


"Albus Severus, you were named for two headmasters of Hogwarts. One of them was a Slytherin and he was probably the bravest man I ever knew."

My finishing quote, though, is from Albus Dumbledore himself:


"Do not pity the dead, Harry. Pity the living and above all, those who live without love."