News Corporation: How Stupid Do They Think We Are? 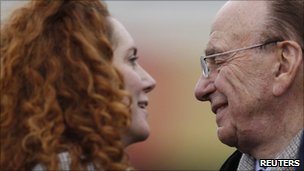 Yesterday's news that News Corporation are throwing the staff at News Of The World to the wolves by closing the paper is surely a new low in corporate cynicism. Few, if any, of those at the paper now were there during the time of the scandals, yet it is their jobs being sacrificied - presumably to protect the jobs of those who were there but are now part of the News Corporation management: Rebekah Brooks, James Murdoch and, of course, Rupert Murdoch. It's not as if the Murdochs are famous for being hands-off.

The most cynical part of the News Corporation ploy is the near-certainty that once the dust settles there will be a launch of The Sun On Sunday, or some such title, looking remarkably similar to the old NoW, and hoping to pick up the same old advertising contracts. Meanwhile this prospect is likely to help keep the old NoW staff from saying too much, as they will be hoping for jobs on the 'new' paper.

David Cameron, UK Prime Minister, is desperately spinning, hoping to avoid too much of the flak, whilst keeping his News Corp buddies as sweet as possible. I anticipate an intended end-game where the various inquiries decide that all of the British media has behaved badly, not  just the News Corp titles which led the 'race to the bottom' in newspaper standards in the first place; where News Corps gets given full control of BSkyB; and where nothing meaningful changes.

I hope for, but don't expect, rules restricting the amount of control one organisation - never mind one individual - has over the British media, with News Corp having to sell its shares in BSkyB; along with significant restrictions on cross-subsidies which distort the media marketplace (for instance, those manipulations which gave Murdoch his large stake in BSkyB in the first place). I also hope for a major clampdown on tax avoidance by large multi-nationals, such as News Corp, since these tax dodges give such organisations an unfair, and distorting, advantage over those organisations who do pay their taxes. In addition, I'd like to see nationality rules, such as those in the US (if they still apply?), restricting who owns major parts of the British media in the first place, but that's unlikely to happen.

One important question in the kerfuffle to come will be how effectively Andy Coulson has been silenced. He was editor of the News Of The World immediately after Rebekah Brooks/Wade, so it seems likely that he knows where some of the evidence is hidden. Since he is obviously being sacrificed by News Corp to protect her, I wonder why he should continue to keep her secrets?
Posted by BlackPhi at 12:57