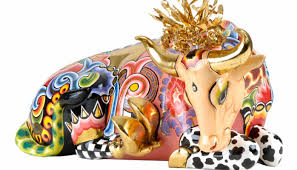 Sacred cow: Something too highly regarded to be open to criticism or curtailment.

Lots of us find change in our lives to be an uncomfortable process for all sorts of reasons, both practical and abstract. Change is especially difficult when it challenges core assumptions which we may not even have realised were there.

The same discomfort, but magnified, tends to face churches as we recognise our need for change. St John's Church has been wrestling with it for a few years now, and we're coming to recognise that our pace of change needs to increase dramatically into the near future.

Our Rector, who specialises in interesting questions, asked a few weeks ago what the 'sacred cows' were here: what is there which is sacrosanct for us - not open to change at all.

The trouble with initial responses to a question like that, at least for me, is that I tend to think of other people's sacred cows: the pulpit which is never used - long made obsolete by a sound system and a change to the old patriarchal culture - but which we can't get rid of, or even move; or archaic language used in prayer - often taken to mean the exact opposite of what was meant originally. I'm happy to lose their sacred cows, but I wasn't even sure I had any.

Later I did some more thinking. We definitely need to change and grow, but what would be too high a price?

Over the river is a large Anglican church, one of whose senior members has a reputation for being very unwelcoming toward same-sex couples: they hit the front page of the local paper on the issue some years back. If that church offered us a group led by this senior member to help us grow, I would take a lot of convincing.

Similarly there are a number of religious groups around Reading, many following a charismatic tradition, who are virulently anti-Muslim. I don't see how partnership with such groups could possibly work.

Now, I need to be careful here. Being unwelcoming to those with reservations about same-sex relationships, say, is also neither inclusive nor open. But there is a difference between following one's conscience in one's own life and trying to use your values to exclude or to manipulate the behaviour of others. As the saying goes: "If you don't believe in gay marriage then don't marry a gay person."

There is a question of integrity, of being true to the Christian values we proclaim. There is also, for me, a fundamental question around what it is which is distinctive about the faith proclaimed in the pages of the New Testament, particularly by Jesus himself.

My reading is that Jesus offered openness and genuine welcome to those excluded by the religious groups of his day. I am in the middle of a little book by Rowan Williams on Paul, looking why what he said was so revolutionary, then and now. Again the answer lies around inclusion not exclusion, welcome not rejection, removing barriers not building them.

In my view any attempt to build up St John's numbers by building walls, by scorning and excluding others, and by emphasising our own holiness and distinctiveness, may or may not help with numbers and dedication, but it would be building up something which is non-Christian, or at best sub-Christian.

Herod's Temple was characterised by its high walls and by its levels of exclusion: a building whose purpose was meant to be bringing people close to God in worship became a place dedicated to separating people from God. When Jesus died on the cross, we are told that the curtain in that Temple, the curtain which separated off the 'Holy of Holies', God's dwelling place, was torn in two, from top to bottom, opening the way to God for all.

Following Jesus is about enabling people to meet God for themselves - all sorts of people, irrespective of gender, social class, race, religious upbringing, relationships, scientific literacy, doubts and certainties. All are welcome to 'taste and see' in their own way; our job is to welcome them and to share what we have found to be life-affirming.

That's my sacred cow. What about you?
Posted by BlackPhi at 21:01