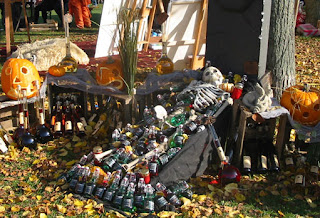 'Mystic Halloween Market', 'pagan folk', heavy metal music - is that sort of festival an appropriate place for good Christian people? Or even "children of God: created in His image, fallen, redeemed, struggling, looking forward to renewal" to quote my own sidebar? Were we putting ourselves in dire spiritual danger by going to such a festival?

There are many - maybe you are one - to whom this has an obvious answer: for some it is obvious that paganism and the occult are spiritually dangerous; for others it is equally obvious that this is just empty superstition and intolerance, and that such festivals should be judged on their music alone.

Firstly, for me the baseline is that Jesus is Lord. Whatever spiritual dangers might be associated with such things, Jesus is our rock and our protector.

On one level that is the final word, but as fallen people in a fallen world we have our own responsibility to take spiritual care. More on that a bit further down.

So, secondly, what issues and problems might the occult pose for a follower of Jesus?

I think the first thing to say is that, in spite of its name (and the boozy skeleton shown above), the Mystic Halloween Market was much more about paganism than about the occult as such. In pagan circles Halloween is more associated with Samhain, marking the end of harvest and the beginning of winter - the 'darker half' of the year - than with any Christian, or ex-Christian, tradition of 'All Hallow's Eve' as a festival of the dead.

Nevertheless, occult links exist, and it is, I think, worth briefly looking at a couple of its issues. Occult practices cover a wide range of areas - overlapping with broader paganism in places - but I just want to focus on a couple of these.

The first is an occult focus on death and communicating with the dead. For Christians, following Jesus is about life, life at its fullest, so focussing on death is facing the wrong way. Even the cross, apparently a symbol of torture and death, is seen as being transformed by Jesus' sacrifice into a sign of God's love and the life he brings.

Then, when it comes to communicating with the dead, the Christian viewpoint is that this is something to be done through prayer: if we believe that someone's spirit is with God then prayer is the way to tell what needs to be told and to feel their ongoing presence and comfort, along with God's.

Attempting to short-circuit that through mediums, seances and even ouija boards can be seen as one or more of: futile, because the dead don't talk; or inconsiderate, because the dead are meant to be left to 'rest in peace' until the resurrection; or even dangerous, because you can end up communicating with something much nastier than you intended.

The Old Testament ban on witches was almost certainly a ban on mediums, those who attempt to raise the dead - see the Witch of Endor - not on harmless, if eccentric, elderly ladies, nor any of the other groups an overly intolerant Medieval Church used it against.

Thirdly, what about paganism? The essential question for a follower of Jesus is: why worship the created instead of the creator? That said, paganism refers basically to a group of religions, many rehashed heavily for the modern age, which - like nearly all religions - have their good sides and their bad. The appropriately Christian approach is to celebrate what is life-affirming and to refrain from involvement in whatever denies life in its fullness for all. But avoid idolatry yourself.

The apostle Paul wrote the go-to passages on this (here and here) in his letter to the troubled church at Corinth, who were worried about taking part in idol worship by buying (suspiciously reasonably priced) meat from butchers close to temples where idolatrous sacrifices were taking place.

Paul strikes a balance: on the one hand food is a gift from God for our good; on the other taking direct part in idol-worship is disloyal to Jesus and his Body, and effectively a denial of the power of God. So the question is, what actions carry the danger of leading us to worship idols?

If our conscience is clear and we can enjoy the good music of pagan folk, say, then we should give thanks to God for it. If our background is such that we are vulnerable to superstition and focussing on what is dark and unwholesome, then avoid it. If we find a pagan's take on the beauty of nature and the interconnectedness of all life to be life-affirming and reflecting glory on the creator who made it all that is a good thing. But if we find ourselves tempted to start prioritising natural things over people and over following Jesus, then that is a different matter.

But really any problem is within ourselves, let's not blame someone else's belief for our flaws. It's a bit like a recovering alcoholic who is following Jesus: drinking beer or wine is likely a really bad idea for them, but for others there is no problem, in moderation. Paul even recommends a little wine for his protégé Timothy on one occasion, to settle his stomach. So do not judge others according to your own weaknesses.

So, my unsurprising conclusion (given that we went to the Autumn Moon Festival, sharing its site with the Mystic Halloween Market, in the first place) is that, so long as we put our trust in Jesus, paganism is nothing to fear. As Jesus' friend John once wrote: "God is love ... there is no fear in love; perfect love casts out fear."

So take the light of Jesus with you, affirm life to its fullest wherever you may go, and may the grace and peace that comes from God the Father and from Jesus Christ be yours in all that you do in the days and weeks to come.
Posted by BlackPhi at 13:06