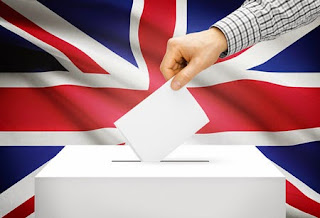 "Christianity is an incarnational faith – Jesus Christ lived as one of us, shared the joys and hardships of ordinary life and died a violent and shameful death. Wherever we find ourselves, he has shared our condition. His resurrection is a sign that the sufferings of the world are not the last word and that God’s transforming power can turn the material world – not just the spiritual – to work for good. Christians believe that we are called to share in this responsibility for bringing to birth a new creation."

The above is a quote from the Anglican bishops' pastoral letter (pdf link) published in February addressing the forthcoming general election, under the heading "Who is my neighbour?" Part of the point of the quote is that this world matters because Jesus was born into it, becoming one of us.

Whenever Christians pray "your Kingdom come" we are committing ourselves to doing what we can to help that to happen, and Jesus' life and teaching show us that God's Kingdom is far more about the way we treat others - particularly the sick, the scorned, and the outsider - than about some form of private personal belief system. As James puts it:


"Suppose a brother or a sister is without clothes and daily food.  If one of you says to them, “Go in peace; keep warm and well fed,” but does nothing about their physical needs, what good is it?"

Even before the letter was published the right-leaning press were complaining about it, and Tory MPs were, we are told on Nick Baines' blog, criticising it even though they admitted they had not actually read the document. The implication has to be that some right-wingers assume, without needing to check, that their favoured policies are simply unChristian.

The letter itself is careful neither to choose any one party over another, nor to promote specific political policies. What it does try to do is to promote a new vision for political life, and indeed for British society's values. It's a huge document but well worth a read.

My aim in this post is rather more modest: I just want to address a couple of political hot-spots and look at how it is that Christians in different parties may, in good faith, promote different approaches.

For one person to have more than they need, whilst another has less is simply wrong, that's easy. But what you do about it is less so. If the wealthy ignore the call to share their riches, like the rich man with Lazarus at his gate, what is to be done?

One view is that the state should step in, remove some of the excess wealth and pass it on to those in poverty. Another view is that it is down to an individual's conscience what they do with their money and if they choose to spend it on themselves that is their right. Maybe the church should be more persuasive in its teaching?

There is a lot of data to show that inequality is harmful to societies (see The Spirit Level, by Wilkinson & Pickett, for a slightly dated summary of the scientific evidence). There is also evidence to show that excessive welfare can also be harmful to societies, including to the recipients (John Bird of The Big Issue is an outspoken proponent that another approach is needed). Something more dynamic and more balanced is required.

So there are Christians in all the main political parties, all working for justice and to alleviate poverty, but in different ways, using different strategies. Some of them, some of the time, maybe compromise on God's Kingdom in favour of their political ideology, but we should all be wary of casting the first stone.

Health is an area that seems to have been central to Jesus' proclamation of God's Kingdom, so any Christian should be concerned about healthcare for all. In UK politics the argument is then over whether state control or more private/market provision is the best way of delivering that.

I have to say that I personally would find the market approaches more credible if they were not so obviously influenced by the USA's incredibly expensive and inefficient system, which has become a huge moneymaker for the health industry whilst leaving their nation generally unhealthy. There are many nations which do have efficient healthcare systems - both public and private. If the political parties were seen to be learning from them I would find it a lot more credible.

Finally, foreigners. Immigration is a big issue in this election, and it is a tricky one because clearly racism, overt or covert, is a part of the equation. Nevertheless one doesn't have to be racist to believe that there are problems which need to be addressed.

In the Old Testament the Israelites are reminded that they used to be slaves in Egypt until God rescued them and took them to another land. So, in some places, the importance of welcoming strangers and treating them well is highlighted. Other parts of the OT are rather more chauvinistic.

In the New Testament we have Jesus' family finding refuge in Egypt, when Herod was gunning for them. We also see in Acts and in Paul's writings a call for the church to accept people of all races and conditions, all equal in Christ. Racism and racial prejudice are alien to Christian living.

UKIP has its roots in anti-European groups of the past and has leading members today who appear to be out-and-out racists. Whether the current leader and official party policy are part of this or not, it remains part of the DNA of the party, and it will be a long time, if ever, before that is purged, in my view.

Other parties, though, also 'talk tough' on immigration, reacting to a perception that it is a problem in Britain. Given global mobility it is hard to see that completely open borders would work as a policy, so again it becomes a matter of degree.

In my view the questions that Christians should be asking about different parties' immigration policies should address whether they are promoting fear and division; whether they affirm the humanity of all immigrants, established, new and failed; and whether they are accompanied by policies to alleviate conditions which drive these people movements. For example the current government's attempts to keep overseas aid at generous levels is a positive example, whilst the current foreign secretary's warmongering tone has helped encourage the instabilities in Syria and Libya which generate so many refugees.

Ultimately, we live in a fallen world. No political system or party can deliver true peace and prosperity, only God; all parties and party leaders are fallible; all voters and members of our society are also fallible. Part of the judgement we must make as we come to vote includes how the policies and decision makers balance a vision of a better world with a reality in dealing with this one.

However the elections go this Thursday, may God bless and guide all who shoulder the heavy burden of guiding our country through the next five years.
Posted by BlackPhi at 16:38