We're currently in the middle of Fairtrade Fortnight. At St John's Church this morning we showed the full version of the Fairtrade Foundation's film showing the difference that Fair Trade makes in people's lives. To the right is the short version; for the longer version click here.

The Anglican lectionary takes no notice of such things: it just ploughs on with an excerpt from the Noah story and a section from Mark's Gospel where Jesus starts to set his face toward Jerusalem and the cross, and warns his followers that suffering is part of their journey.

The Fairtrade Foundation's films are very good at showing the practical differences which the extra income from selling Fair Trade goods makes to the daily lives of the poorest communities. But I also think it illustrates how meeting basic needs gives space for hope and for making plans for a better future.

The Big Issue magazine has the motto that it is "a hand up not a handout". It aims to support vendors in their struggles to escape poverty and all that goes with it, by helping them to work their way into a better situation. The same concept underlies Fairtrade and other trade-related groups and campaigns, seeking fair "Trade not Aid". The idea is to provide the poorest communities with a fair income for their wares, allowing them to work their way to a better life.

The Fairtrade foundation do a wonderful job ... as far as they go. They work with primary producers: the growers and agricultural labourers. As far as I know, they don't do anything to move the higher value aspects of trade away from wealthy countries and into poorer ones. Things like processing, packaging, marketing and distribution. The 'added value' areas where the bulk of the money paid by the consumer goes. 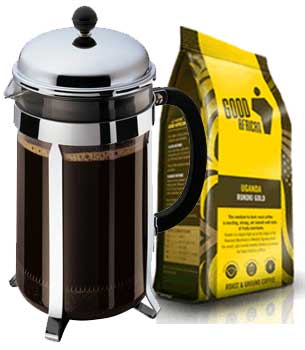 A couple of years back I was disappointed to see Good African Coffee - which is processed in Uganda - disappear from Waitrose, although I was pleased - if surprised - to find that I could buy it in Tesco. After Tesco's recent turbulent times it looks as though they are cutting back on their product range, though, as there was no sign of Good African Coffee when I went looking this week. Maybe they can't pay the vast sums which Tesco are said to demand for a visible shelf position.

Looking at their website I get the impression that Good African Coffee are running out of steam. But I do hope they they have been pioneers of a process which will see fairer trade overall between rich and poor nations. Fair trade in primary agricultural and mineral production, but also fairer trade in processing, distributing and marketing of products.

In many ways the reality of that depends upon us, the consumers. If we use our spending power to encourage fair trade, to bring hope rather than exploitation, to provide a hand up rather than just responding to appeals for a handout, then we can change the lives of so many for the better.

Wouldn't that be a useful change to make over your Lent 2015?

Edit:  Oops. It turns out that it was part of the Abraham story rather than Noah in this week's lectionary. No wonder people looked confused when I talked about rainbows this morning!
Posted by BlackPhi at 16:47