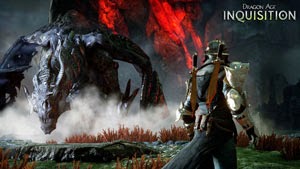 A couple of months ago I posted an initial impression of the computer role-playing game Dragon Age: Inquisition. I have since given the game quite a thorough going over, so here is my full review:-


There is a decent game in here, with the usual Bioware strength in storytelling and characters, buried under a morass of dull side-quests and brain-dead combat.


These are highly detailed and look good on screenshots. Visual ‘realism’ doesn’t hang together as well when playing the game, and oddities and inconsistencies stand out against the more detailed and ‘realistic’ basic graphics.

There are a number of different areas in the DAI world, each with their own area style, which gives a good sense of environmental variety. Unfortunately blurring and mistiness spoil what should be the more dramatic vistas.

Facial detail is erratic: they seem to have gone to a lot of trouble with irises, yet the whites of the eyes often turn strangely pink/red during conversations and cutscenes. Hair quality is generally poor – on medium graphics quality it is very poor – and facial hair is worse.

Many character animations are poor. Female characters tend to stoop during conversations, Cassandra in particular looks as if she suffers from permanent stomach cramps. Meanwhile a female human Inquisitor stands with arms held away from her body like a penguin, whilst Cullen minces across the room to the War Table. These are all animations we see a lot.

There is a lot of clipping goes on: hair clipping ears, Solas’ thumbs clip his clothes in conversation, arms sometimes clip bodies, and so on. This is disappointing in a modern high-budget game.


Sound effects are clear but hardly noticeable, which suggests they are done well. Basically things make the noises you expect them to.

Generally speaking, background music and ambient sounds are present but fairly minimal: they are there at the usual places but you don’t really notice them much.

The main character is voiced, with only two choices of voice for a given character type (British accent or US accent, for me). The main NPC characters are well voiced, with many old characters making a welcome return from earlier episodes. Minor characters are generally well-voiced too, although the dodgy French accent of those from Orlais becomes wearing after a while.

There is a really excellent musical interlude at (what I assume to be) the ending of the first chapter. It creates a genuinely moving and memorable moment. There are other moments where the music becomes more intense as the action or the drama does, with great effect.

There is a singer in the main tavern, singing a variety of songs (a far better variety of far better songs than Skyrim, say). I know the songs are good because I downloaded several of them separately. Unfortunately, in-game the sound in the taverns is poor, so you can’t really appreciate them (sadly unlike Skyrim where the tavern songs are positively obtrusive).

Ambient speech (the random comments made by people as you pass) varies from good to excellent. It frequently reflects actions you have taken: for example in the case of an early quest you get small family groups whose comments originally reflect adults claiming not to be hungry to encourage children to eat what little there is, which changes to comments about there being plenty for everyone “thanks to the inquisition”.

These game areas are big, far larger than anything in earlier Dragon Age episodes. As mentioned earlier they have a good variety of visual and auditory styles.

Extensive use is made of the environment to channel where the player can and cannot go, often extremely irritatingly. Extensive ranges of ten-foot high cliffs, which the game mechanics prevent you from going up, are as frustrating as they are geologically implausible.

Some of the environments have a range of difficulty levels within the same area; presumably the idea is that you have a reason to come back later. In the Hinterlands, for example, which is the first area you get to explore, there is a tunnel leading to an area where you can see a dragon in the distance. This dragon flies around for a bit then toasts your party if you hang around. That makes sense to me.

What doesn’t make sense in the same area is that different fade rifts – ‘tears’ through which demons come, which you are able to close once the demons are defeated – have very different difficulty levels, yet (as far as I can see) no visible difference between easy and hard. So the only warning you get that a particular rift is too hard for your party level is the ease with which the demons wipe you out.


The basic combat mechanic/strategy seems to be that you hold down the fire button and press special move buttons as they become active. Attacks auto-target – sometimes to the target you are clicking over, sometimes not – and many special moves automatically jump to the selected target. It really is that mindless.

If you want to move yourself (eg to get a rogue behind an enemy ready for a backstab) and you haven’t got a special move to do it for you, then combat is very cumbersome, at least in normal mode. Similarly if you want to choose your own target(s). You can do it, using a combination of pausing and right-clicking, but the game works against you.

If you want to have your characters working together tactically, the game really works against you. NPCs retarget really quickly, and if you pause then swap characters it promptly unpauses and carries on combat.

There is a tactical combat mode which is supposed to help those who want a more thoughtful approach to combat. Unfortunately it is completely broken. It is meant to give you a top-down view of the battlefield on which you can issue orders to all your characters. The trouble is that, even in the open air, the camera is far too low, so you cannot see most of the battlefield. In principle you can move the camera around, but this is clunky on the flat, and the camera gets blocked or trapped by changes in elevation. In tunnels or enclosed spaces you cannot see anything useful at all.

Skill trees and AI options are dumbed down; even something is simple as issuing a command for all characters to 'hold' is ineffective as often as not.


The main storyline has parallels with that of Dragon Age Origins: the world is threatened with destruction, but before you save it you have to deal with loads of people who reckon this is a good time to focus on killing one another.

The story gameplay is mostly linear; the main option is whether you seek support from the mages or from the templars. Each has its own separate quest/area to gain that side’s support; the others form the main opponents in a later major battle.

It’s a well-balanced story, I think, with suitably major battles along the way and a satisfyingly epic ending. I like the use of an epilogue to highlight the consequences of some of the decisions you make along the way; although by and large I wasn’t that invested in most of those decisions or consequences.

The big problem with the main storyline is that it is spaced out by a need to gain ‘power’ in order to progress, and to level up your characters so they are strong enough for the next story area. You do this by going out into the various different areas on the War Table and World Map, and performing various tasks there: some meaningful and engaging, many not. Eventually you become ready to take on the next challenge and can re-engage with the story again. Since the storyline quests are flagged up as being terribly urgent when you first hear about them, these delays are quite immersion-breaking.

There appears to be a major storyline cop-out concerning Morrigan and her son (spoiler warning here, kind-of). At the end of Dragon Age Origins her pregnancy is left as a major hanging plotline, apparently heralding great mysteries to come. If you start with DAI’s default backstory, she wasn’t even pregnant, so there is no son. If you set up your own backstory then you can make it so that she does have a son, but it all seems to be a damp squib. Things are left open as to possible consequences in later episodes, but in DAI this non-event is a real disappointment.


Each area has its own fairly major quest, and some have quests directly relating to the story quest and/or quests relating to one of the followers. These quests are often quite engaging. There are also various activities aimed at building up power, typically by closing fade rifts and claiming key points for the Inquisition.

In addition the main areas are all smothered in trivial quests. Some of these are the traditional ‘fetch’ quests: go from A to B to collect something, or talk to someone, then go back to A, possibly via C. Standard filler for cRPGs when the writers run out of ideas.

But the worst are the ‘collect’ quests. There are multi-area quests which want you to collect a hundred and odd ‘shards’ to unlock a series of doors, or sixty mosaic pieces, making up five mosaics, and so on. Probably the most annoying of these is a bottle collection quest which insists on triggering a ‘hidden object nearby’ indicator which is normally used for things which are important, so you can’t even just ignore that one. There is also a stack of such quests within each area: collect various minerals or herbs; collect locks to build prisons; collect intestines of creatures killed by dragons; and so on.

Follower quests are obtained by talking to the follower/advisor characters; presumably only if they don’t dislike you. The early quests often seem a bit trivial but as you go through the quest series it can become more engaging and even moving. Romanceable characters have additional quests to advance the romance.


There are basically two main routes through the storyline, and a player would typically only do a proportion of the character quests in one run-through, along with a single romance quest (out of eight). If the combat worked properly there would also be a number of different class and race options.

In practice, I have played through it once when I explored the available areas and got the hang of how to play the game reasonably efficiently and without too much frustration. I then went through a second time in hard mode choosing the alternate options and a very different romance (Sera rather than Cassandra). I started a third run-through to try a few different things but got bored part way through. The trouble is that whilst there is a lot of content in the game, too much of it is basically dull and/or repetitive.

The greatest problem for long term replayability is the lack of any modding tools. The game cries out for interesting quests to fill out the vast areas full of nothing much interesting, and the combat needs a total makeover. Not to mention more cosmetic mods such as decent hair, and a greater variety of customisation options.

Dragon Age Inquisition is an initially good-looking game, which ultimately disappoints. Whilst it is far better than Dragon Age II, it has none of the originality and replayability which made Dragon Age: Origins great.
Posted by BlackPhi at 14:33