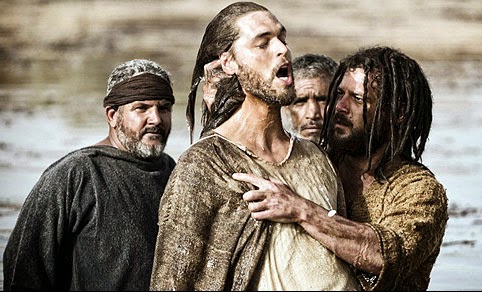 Back to Mark's Gospel:


"The beginning of the good news about Jesus the Messiah, the Son of God."

That 'Son of God' bit is odd in all sorts of ways, one of which is that it is in some but not all of the best early manuscripts.

Many New Testament documents start with an introduction which is in two parts: an initial title, to attract people's interest and say what the document is (the equivalent of the Subject line of an email), followed by a prologue, to introduce the main themes and/or characters of the document. Mark 1:1 above is clearly a title, attention catching in the Roman Empire of the 60s, in a scary kind of way, as discussed in an earlier post. In Greek this title is cumbersome, three genitive clauses ('of' or 'about' in English) end to end, so most expert opinion is that the 'Son of God' phrase was in the original but got tidied out by some later scribes.

When Mark was written this phrase would have been seen as a direct reference to a title claimed by Roman Emperors from Augustus to Nero: each emperor would be declared a god after their death, so the next emperor would be a 'son of god', expecting to be declared god himself in due course (when Vespasian was dying he is said to have joked: "Oh dear! I think I'm becoming a god.").

Augustus was the first to claim the title 'divi filius' - the son of God. An inscription from 9 BC, found in Priene, speaks of Augustus as 'saviour' and his birth as 'the beginning of the good news'. So Mark is clearly making a political point in his title, but later scribes might have felt it ... unwise ... to offend their emperor quite so obviously.

The title 'Son of God' also had political implications for Jews. In the Jewish scriptures (the 'Old Testament') the title is used for Israel as a whole, and for her princes and leaders, but most especially for kings thought to be divinely anointed (ie Messiahs), epitomised by David.

So Mark's initial use of 'Son of God' is profoundly political, to both Jewish and Roman hearers, claiming Jesus' rule over Jew and non-Jew alike.

Later in the prologue there is a more personal introduction to this theme: as Jesus comes up from his baptism, he hears God's affirmation and commission:

In the first half of Mark's Gospel it is only demons and evil spirits who recognise Jesus as God's son. It is not until the pivot point in the story, at the end of chapter 8 and the beginning of chapter 9, that the disciples begin to grasp that Jesus is the Messiah, the anointed one. Jesus promptly starts talking about suffering, rejection and death, horrifying Peter.

In chapter 9 God repeats his affirmation of Jesus, this time for Peter, James and John to hear:

From then on the road is to Jerusalem, to Golgotha and to the tomb.

At Jesus' trial he is challenged by the High Priest:


"Are you the Messiah, the Son of the Blessed One?"

"'I am,' said Jesus. 'And you will see the Son of Man sitting at the right hand of the Mighty One and coming on the clouds of heaven.'"

Enough for the religious leaders to find Jesus "worthy of death".

Finally, at Jesus' death the centurion on guard exclaims:


"Surely this man was the son of God."

In Mark (unlike John, say) the use of the title 'Son of God' for Jesus is not explicitly Trinitarian. It is about the rule of God: about God, through Jesus, beginning the process of taking the reigns of political and religious control over the world. Not in a top-down, coercive way, but by being recognised and trusted by ordinary people as Lord and Saviour.

Religious and secular rulers conspired to murder Jesus, ordinary Jews and Romans, even a centurion, trusted in him, By the time Mark wrote this Gospel, Jesus' followers had been suffering unjustly, just as Jesus had suffered.

Now Mark is asking the question of his readers (including you and I): will we follow Jesus, even through hardship, or do we continue in the ways of a corrupt and ultimately doomed society, where might is right and justice makes way for expedience?

What is your choice?
Posted by BlackPhi at 11:51