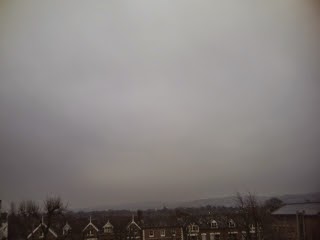 Grey, gloomy, damp and chilly. I think I must be letting it get to me.

There is a story that has been floating round Facebook for a few days now about a Muslim family allegedly asking that a Romany Roman Catholic be exhumed because he had been buried in the grave next to one of their relatives.

The story was originally reported by The Hinckley Times, before being picked up by right-wing newspapers and Islamophobic groups around the world.

The Hinckley Times have now pulled the story from their website (it was here). When I looked at it earlier in the week it was a classic 'local news' unresearched story, basically reporting on someone feeling upset about what they thought they had been told, but not bothering to check the story out with any of the officials involved. The mainstream newspapers who had copied the story did their follow-up the next day and promptly printed stories saying that no there would not be an exhumation. It was a non-story.

The local parish council, the officials involved, later put out a statement saying:


"An inaccurate, divisive and inflammatory article printed in The Hinckley Times appeared to indicate that Burbage Parish Council has considered the exhumation of a person recently interred at Burbage Cemetery – this is totally untrue and without foundation."

The underlying fact is that in England parish councils cannot exhume anybody, that can only be done by a direct order from the Home Office, which there was never any prospect of in this case.

It looks as though there was a misunderstanding about the purpose of this particular area of the cemetery, the council tried talking to the people involved, the local press found out and misreported the situation, the bigots and racists picked up their report and ran with it, and people get indignant because they cannot be bothered to check things out for themselves.

On a more religious note, I have been trying to find a commentary on Mark's Gospel which mentions what was going on in the Roman Empire at the time (civil war and chaos, basically). None seem to. It is as if this Gospel just exists in a sort of religious bubble, unrelated to the concerns and fears of those it was written for.

Churches wonder why non-churchgoers find what we do irrelevant to their daily lives. If those who study the Bible - which we claim to be the foundation of our faith - cannot even be bothered to think about how what was written related to the daily lives of those who lived then, what chance is there of any of them bothering to look at how it relates to the real world now.

Mark's Gospel seems to have been written for busy, cosmopolitan, politically aware readers. There are a lot of people like that in Caversham, but nothing to communicate what it says to them/us. Traditional translations, even traditional preaching, are framed as churchey meaningless woffle, without contemporary meaning or content (except for the traditional 'moral' lessons, of course).

What I find most frustrating about this, though, is that I am not clever enough to do it myself. I can adapt and comment on other people's work, but actually clarifying what Mark was saying to people in the midst of civil war and political chaos, then restating that for people living through the economic and political chaos of the beginning of the 21st century, say, is beyond me.

Yet those who are clever enough, and who say they care about what the Bible has to say, seem unwilling to present it as something real, speaking to real people in a real society.

As I say, it's a grey day and I feel grey. Nevertheless, tomorrow is another day, and life is a gift, to be celebrated and enjoyed as best we can. Grace and peace to you, and all you care for.
Posted by BlackPhi at 14:19