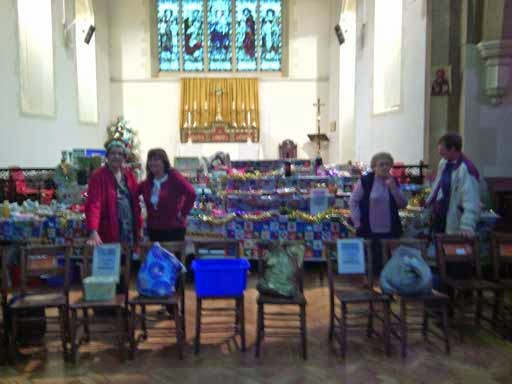 I'm really rather conflicted over Barclay's Bank. At the giant multi-national corporate level I remember it as the 'apartheid bank' of the seventies and eighties; now, in the 21st Century, it keeps hitting the headlines for highly dodgy wheeler-dealing and dubious financial ethics.

In the late nineties, after apartheid was over, it was the only bank with a branch in Caversham which met my small business needs, so I opened a business account there. I find the local branch brings a very different set of associations from the central institution. I have, over many years, found the staff there to be helpful and professional. I've had the odd dubious communication from Barclay's over the years, all apparently from either head office or their marketing department, but no problem at all with the branch itself.

St John's had its Christmas Fair today, which is what got me thinking about Barclay's. Two of their branch staff came over to help us out on the two busiest stalls, did a great job, then matched the takings on those stalls from their branch funds. A small amount for Barclay's, no doubt, but immensely helpful to us. More importantly, though, it was done in the context of involvement: giving up their time and commitment to get involved and make a difference within the local community.

So bravo to Barclay's Caversham branch, to the staff who came and helped out today, and to the other branch staff who doubtless help other community endeavours over the year.

Every now and again there are rumours that Barclay's head office might close their Caversham branch. If that happens I will move my account in a shot (not that they'll miss its small turnover). Until then, though, I will appreciate the positives and be grateful for bank staff who want to give something to their local community.
Posted by BlackPhi at 21:40