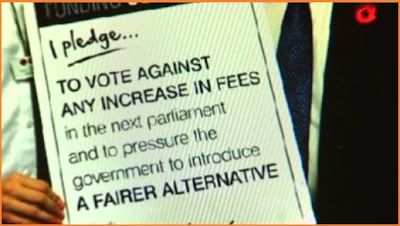 Tomorrow (Thursday, 5th May) is local elections day in England. This is a chance for all of us to make clear to all politicians how we feel about outright, bare-faced lying in elections.

A year ago we had the full UK parliamentary elections. In the run-up to these, every Liberal Democrat MP signed a personal pledge to vote against any increase in university tuition fees. This was a personal promise, given without qualifications, by each MP. It wasn't a manifesto, if-we-get-power-and-everything-is-as-we-expect, sort of promise. It was just a simple pledge, made in writing. It gained the Lib-Dems a lot of extra votes, because many people in this country believe that having a skilled and educated population is vital to our successful future as a nation.

As it turned out, the election result was inconclusive, so the Tories offered the Liberal Democrats an illusion of power providing they sold out their electorate and reneged on their promises. Something like two-thirds of them did precisely that: selling out their constituents for a seat at (or near) the top table. The rest of the MPs, and the rest of the Liberal Democrat party, condoned this betrayal by failing to call for deselection of MPs who broke their promises to their voters, and failing to replace Nick Clegg as party leader (or to remove the whip from Vince Cable, the architect of the betrayal).

The assumption seems to be that the British electorate has such a short memory that we'll have forgotten about this by the time of the next election.

I call on all voters to go out tomorrow and vote against your Liberal Democrat candidate - vote for Labour, or Green, or Tory ... even Pirate or Monster Raving Loonie if they are standing in your constituency. But vote against outright barefaced lying. Maybe, if their share of the vote is close enough to zero, the Lib Dems will rediscover their conscience, dump their cynical power-hungry leaders, and get out of that destructive coalition.
Posted by BlackPhi at 19:12