The Prince Of Wales In Caversham 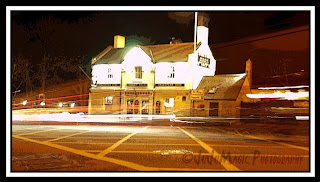 I've mentioned the PoW several times in previous posts, but I thought it was worth its own ramble today.

Something I only realised recently is that the Prince of Wales is actually part of a small chain of pubs - it seems the same team also run the Fisherman's Cottage and the Rising Sun. It's a very long time since I last went to either of those, but my memory of the Fisherman's Cottage is that it is next to the Kennet, over in Newtown, and seemed mostly focussed on the lunchtime office workers' trade, whilst the Rising Sun is an edge-of-town-centre pub which (back then) had a bit of an unfriendly reputation. As you can probably tell from the links I've put in, there's not much information on the web about either, although it seems that the Rising Sun are also featuring weekly live music and are starting to do food. Clearly the team responsible for the three pubs are not really into posting much info on the internet. Still, I reckon they've done a good job on the Prince, so if you live near either of the other two, they have to be worth a visit.

Like many pubs these days, the Prince has a fairly sizeable and pleasant outdoor area, to cater for smokers and anyone who fancies getting out of the main building and breathing lovely vehicle fumes from Prospect Street. A couple of Fridays ago I turned up, on my bike, to find the outdoor section completely full. Indoors it was like a Tokyo bullet train - absolutely packed. The reason was a local band showcase, with four local bands all playing on the same evening. I watched about half a set from one band, who were excellent, but claustrophobia took over in the interval and I squeezed my way out and left. Maybe they should do fewer local bands at once but more often?

Tonight they had The Generaters playing - to a busy but (thankfully) not completely packed audience - it's the first gig in a while where I've felt motivated to stay to the very end (life's a bit complicated and very tiring recently). They weren't perfect by any means, but were very enjoyable. Basically they play covers in and around the borderland between rock and funk. At times they really hit the groove and were brilliant, but they kept falling back out again. There was a tension between a younger singer and bass player, with an older guitarist and drummer, which sometimes worked and sometimes didn't. The lowlight of the set was a version of Queen's We Will Rock You, where the guitarist just went AWOL  (try to imagine the song without the lead guitar parts, and you'll see why it didn't work), followed by what I assume was AC/DC's Highway To Hell, completely testosterone-free. The main highlight was the encore, something about 'burning your sex'(?), where the guitarist and bass player swapped instruments and the singer finally persuaded several men to come up and 'dance'; but an honourable mention has to go to a really good cover of Bowie's Spiders From Mars during the first session.

I did plan to insert a photo of The Generators from a previous visit to the Prince into this post, but their Flickr albums block copying, so I can't.

Somewhat ironically, I seem to be visiting the Prince of Wales more often since we moved further away from it - as well as the Saturday night live bands (and occasionally Friday too) they also do excellent Thai food, so the two of us sometimes pop over for that also (the kids aren't keen on Thai, which is a bit of a pain, but they are old enough to be left to their own devices from time to time). The beer is more expensive, but far better kept, than the horrible big-chain pub down the road, and it is a genuine, friendly, community pub, which has to be good news.

PS: I meant to mention that on the 'Local Bands' night I dropped my coin purse somewhere in the PoW. When I popped around next day in the slight hope someone might have found it, there it was behind the bar waiting for me. As I said, a proper community pub.
Posted by BlackPhi at 01:10