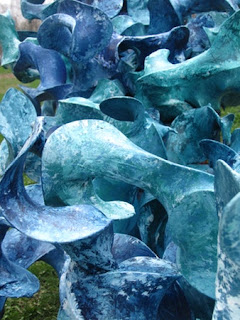 A small diversion into the problems which can arise when trying to understand Biblical language in a very different culture.

The fourth beatitude says (in the usual English translation) "Blessed are those who hunger and thirst for righteousness ...", so why does my previous post talk about justice?

On a simplistic level it is because the underlying Greek word used by Matthew, dikaiosynēn, literally means 'impartial justice'.

The problem is that 'justice' in Biblical context is not the same as in the western-European (and ex-colonies) context we tend to assume. Indeed, this is true of legal language in general, which is why many traditional approaches to St Paul's letter to the Romans often miss its point.

We tend to think of law and justice in the sense of criminal law and criminal justice: some sort of abstract and unchanging right and wrong. In the Bible things are much more concrete: law and justice are about contract law - keeping or breaking a solemn and binding agreement. A lot of Biblical language, not least 'Testament' and 'Covenant', reflects this.

In the Old Testament the central contract is that made between God and the Israelites on Mt Sinai: the Torah, or Jewish Law, a contract with ten key clauses and several hundred sub-clauses and applications.

So ‘righteousness’, in Jesus' context, means justice, but a particular idea of justice which is about conformity to God’s Law – more precisely, conformity to the terms and conditions of the covenant which God and the Israelites entered into on Mt Sinai. God is righteous because he keeps his side of that contract; the Israelites, again and again, are unrighteous because they persistently and deliberately fail to keep theirs.

In the third beatitude, those of the poor who lost their land were supposed to have had it returned at the following Jubilee. This hasn’t happened – there is a great injustice – but justice will come, “rolling on like river,” as Amos puts it (Amos 5:24), and “righteousness like a never-failing stream.”

One difference between law as a contract and law as an abstract idea is that a contract can be bought out - redeemed for a price agreed by both sides. Which still leaves the problems that the original Sinai contract was made to address, so you need a new contract: foreshadowed in the prophet Ezekiel's "I will give you a new heart and put a new spirit in you; I will remove from you your heart of stone and give you a heart of flesh."

Which leads us into the great mysteries of Jesus, his death and resurrection, and the role of the Holy Spirit in changing us so that we might become "perfect as our heavenly father is perfect."

Grace and peace to you and to all who love you.
Posted by BlackPhi at 00:56