Justice & Mercy: Back To Back 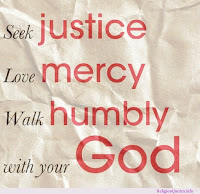 Blessed are the merciful, for they will receive mercy.

Justice and mercy, for Jesus, are like two sides of a single coin. Those who hunger and thirst after justice want the rules to be followed, especially those that protect the poor. Those who are merciful want them relaxed, particularly as they apply to those in desperate need.

If you view Jesus’ words as about rules rather than people this beatitude seems to be a contradiction of the previous one. But if you understand Jesus as speaking hope to people whose hope is lost, it becomes clear that these beatitudes are to be seen as standing back-to-back supporting one another, together revealing good news for the poor.

Like many of the terms used in these beatitudes, ‘mercy’ is a complex concept. It is about compassion and it is about letting people off who have broken an agreement and it is about not demanding that someone repays a debt if they cannot afford it and it is about forgiving someone who has wronged you.

Most fundamentally, mercy it is about giving someone a break with whom you are in some sort of relationship. It is about not holding things against people who matter to us, but instead showing the sort of love Paul speaks about in his letter to the Corinthian church:

That’s the basic idea of ‘mercy’, but Luke's Gospel tells us that Jesus ramps this up to also apply to enemies: "Love your enemies, do good to those who hate you, bless those who curse you, pray for those who abuse you." Consider also the ‘Who is my neighbour?’ question answered in the Parable of the Good Samaritan as “The one who shows mercy”. For mercy triumphs over judgement, as James puts it!

Mercy is about attitude, especially our attitude toward people who are different. If someone is in need, it should be irrelevant what their colour, creed, or culture is like: “Do to others as you would have them do to you.” We are to be merciful as our Father is merciful; helping according to need not according to status, enmity, ingratitude or inability to repay.

As James, a leader of the early church, puts it in his letter, this really matters: “For judgement will be shown without mercy to anyone who has shown no mercy.” We have been warned.

But remember that "mercy triumphs over judgement". May you know and show God's mercy this week.